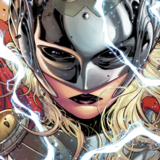 I'm not a fan of Frank Miller

If you liked Marvelman then you'll love Mark Waid's Irredeemable comic if you haven't read it already. ^_^

I have not. Kingdom Come was amazing though.

I wasn't here for Space France itself but things of that nature are a fair chunk of why there is a CVnU. Unilateral large scale changes to the world and empires.

Lex Luthor has learned Superman's identity a number of times. But despite being Superman's greatest enemy, Lex never really did do anything of significance with it despite having tried to destroy Superman on numerous occasions. He basically sat on the knowledge and did nothing with it.

When Kingpin learned Matt was Daredevil, he ruined his life and took everything away from it. But Lex didn't do that to Superman. I guess DC was too squeamish with that possible story.

Born Again is one of the best stories of all time. Born Again, Watchmen and The Dark Knight Returns started the Dark Age of comics and defined an era.

Have you ever read the stuff the two of them wrote before that? I know those three are the classics that everyone reads but I was given Millar's Daredevil Omnibus as a gift this year and enjoyed it. You can see him develop his style in real time. In the beginning he's writing some wham-pow-bam silver age style stuff like everyone else but as the books go on his natural inclinations shine through. You can even see him develop some of the techniques he would use to spectacular effect TDKR. The parallel scenes, the contrasting narration and the compressed narrator dialog.

On that subject I tracked down Alan Moore's Marvelman. Blew me away. One of the best kept secrets of comics. It's an injection of molten silver into the veins and contains many of the elements he would develop fully in Watchmen.

You could see the raw talent in both of them in their earliest works. Everything they would later become creatively was in them from the beginning. They just had to hone the natural gifts they were born with.

Both the left and right are so certain of victory the election will have to be a complete blowout for there to be any chance of the loser accepting the legitimacy of the victor.

I remember when Jackfrags was just one of Frankies sidekicks. Look at him now. He's come a long way.

@paragonxxx: Well I appreciate that. It was not my first choice, for sure. I wanted Shadowhawk but of course, taken. Tried Hawkshadow and a bunch of other stuff and eventually resorted to the old synonym trick.

@paragonxxx: Truth be told I kinda threw that whole thing together as I was doing it. After the first little bit I stabilized on Greg Capullo's Batman but the first day I was using Christian Bale gifs and everything. If I had to go back and do it all over again I would probably..

..do everything exactly the same way because it worked lol.

Another issue is the CV comic character galleries are, at best, barely functional. For a lot of minor characters CV is the best source of art. Or was.

There is also something of a narrowness in art that RPGers look for. Everyone wants to be cool. Everyone wants to be the main character. That is not a bad thing; it is a good thing that motivates people to put in the hours of labor required to collect a gallery of art, build a bio, seek out and/or create storylines and write tens of thousands of words. Without a powerful inner motive force that wouldn't happen. In many cases that force is a subliminal desire to embody a main protagonist/antagonist on their journey.

A large portion of what makes a main character a main character is the ineffable quality of charisma. There are many different types, of course. Some characters with these are intense, others effortlessly cool. Some compel the attention of observers via empathy, others by invoking some primal fear. There are a million ways to get there but regardless, much of the board wants to be there.

This narrows down the pool of looks most RPGers (myself included) considers. I created this account nine years ago and I can recall seeing two fat characters used as looks. Only one of which I remember seeing in actual RPs. Doc Ock is a fairly big deal in comics but I remember seeing one. Wolverine is huge but he is a very rare look; probably because he is short.

Comics are filled with characters both wild and whacky. People enjoy reading about them but I don't feel they see all of those characters as suitable avatars for their creative spirit. This, of course, further reduces the pool of popular comic book looks. The smaller the pool, the more the same looks are reused (and please do not assume I am saying reusing a look is a negative; it is a necessity unless we want to commission art of our characters) and the more the same looks are reused the less 'fresh' a look can feel.