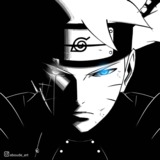 The moon’s light shone broke through the dense tapestry of the forest, he was south of Konohagekure, unsure to home how far he had wandered. The sounds of the leaves crunching beneath his feet had become rhythmic to him. However, he was deep in thought, a pinch of regret had become over him. Not regret over leaving but regret over not having a plan for his leaving. Kyushi, despite his age, wasn’t one to usually act on impulse. Even his outburst earlier that day was calculated, and he was certain no one who could stop him was nearby. However, this, walking amongst the middle of nowhere. Heading nowhere. With no one. Was against his nature. And he had begun to doubt everything, and perhaps try again when he had thought out a better strategy to leaving

It was its sound that got to him before its sound. The sound of rushing waters, steady and strong, filled the atmosphere. The reflection of moonlight light up the river with a sense of serenity, as if leading the young shinobi to it. “Better than nothing” He assured himself before he kneeled down and began to take a sip.

Until some caught his eye.

The split second of a sparkle appeared at the corner of his eye and. before his mind could process it, his body jerked backwards. A moment later a large black object plunged itself into the river in front of him. Turning it into a deep dirty purplish black, as is plunged into its depths ‘Shit, not now!’ He thought to himself as he retreated behind a tree, looking out for his unknown assailant. A quick glance over at the river, now littered with the corpses of fish, and the black object became clear to him, it was a kunai.

His assailant was nowhere to be seen, but that was no problem for him. The blueness within his right eye intensified, and his pupil become an almost milky white. His Dojutsu, the Jogan, has activated, however, for a very brief moment. But in that brief moment he saw more than he needed to. Dozens of immense chakra points were hidden in the trees above him, all watching him with predatory eyes. And amongst them, only one was active, darting throughout the trees towards his location.

His Dojutsu deactivated, and he took a stance as his opponent approached, but when they revealed themselves, he was taken aback. Cold red eyes soon appeared from within the darkness as a girl, around his age, had made her presence known, uncloaking the shadows around her. Her black ink hair moved in subtly, defying the speeds she arrived. And for a brief moment, their eyes meet. Kyushi’s fear and her determination, kindled. Yet, his fear turned into a brief curiosity as he found those eyes recognizable. “Uchiha.” The statement left his lips as a question. But it was unlikely that his question was going to be answered anytime soon as she withdrew two kunai from the hidden pockets of her cloak.

The two young shinobi clashed, her swift and powerful offense appearing suddenly, leaving Kyushi no time to withdraw his own weapon immediately. He swayed and leaned, narrowly dodging and evading what seemed to be an endless assault. Her arms jabbed and swung at him with speed unbelievably at her age, potentially surpassing his own, and she seemed to have had experience with her Sharingan as well. He backpedaled to block, using his forearm against her wrist as she aimed at his chest. He had to be careful not to stumble, or to take too long. As she was going to overtake him eventually and she left him no time to prefer jutsus, less he risked his hand being removed. So he attacked her, not physical, but mentally looking for an opening.

“What is a Uchiha doing out here all alone?” He backpedaled again, she advanced.

“I have no idea what you’re talking about.” She responded, much to his surprise. Assassins were not one for talking.

“I’m talking about your family line. Why are you out here without another Uchiha? Were your parent’s not in the Uchiha Massacre?” The Kunai now barely swung over his adam’s apple, almost as a threat.

“My family line is not that of the Uchiha. I am Yukana.” An impossibility, he was sure. The Sharingan were either implanted or from birth, and hers shone with authenticity.

“You are a Uchiha. Your family died. Aren’t you interested in your past?” And then, it became noticeable she had become, even for that brief second, unfocused. As she swung at him again, he grasped her wrist, ready to strike her in her neck when the coldness of a blade slashed across his back, and he fell to the ground, under paralysis.

He fought, but no matter how much he willed

The figures in trees emerged from their hiding places, gathering around him. They were wearing mask, similar to that of the ANBU. A woman with blond hair cut just below her neck spoke with a firm, sultry voice. “Don’t worry, Kitsune. You can get to sleep now. We’ll be making sure you wake up in a new and comfortable …prison” And against his wishes, he did.