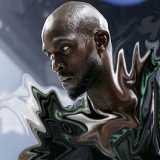 Kyushu Iverson was the Shogun's personal protector and assassin. He was the most skilled warrior in Japan and loyal to its ruler. When the Shogun sent Kyushu to America on a diplomatic mission he met and fell in love with a waitress from Harlem and the pair returned to Japan to be wed.

Soon after they had a son and named him Kyushu Jr. Many in Japan were displeased with this union but none more so then the Shogun, he ordered Kyushu to kill his new born son and wife. Kyushu refused and defied the Shogun. One night the Shogun's Imperial Guards descended upon the home of Kyushu and murdered his wife. A great battle was fought that night with many of the Shogun's Imperial Guard meeting there death at the hands of Kyushu's steel. Eventually the great warrior was cut down and his son was giving to the Shogun to do with as he pleased.

Surprisingly the Shogun spared the child's live. Many whispered that the Shogun couldn't conseve a child of his own and kept the boy for his wife.

He was first taught thee art of Sosho, one of three forms of Japanese calligraphy which in turn translated into his weapons training. As the years past Kyushu Jr. would become his father's equal with the sword and this frightened the Shogun who was slowly losing control of Japan. Kyushu Jr's name was changed and his true identity kept from him, the Shogun would then send him to Iriomote the furthest of thee Yaeyama Islands.