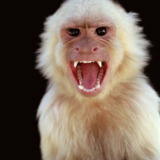 @thisisgonnahurt: A fight to the death between us is truly the only way

@thisisgonnahurt:It's a sacrifice the little guy is willing to make. (:

@thisisgonnahurt: I thought you'd say that.
But think of it like this. I'm quite possibly the only character on here that you could fight at full power, what a way to go out huh?

@thisisgonnahurt:Lmfao! :P
Can I kill you though?

@thisisgonnahurt: Tackles at FTL speeds
MINE!

@the_last_samurai: [Sorry this is late, I literally had it written and forgot to hit post. ):]

Kufu noticed heard and saw his friend's discomfort and swam over to him, preparing to bring the pair back down to Earth. "The Earth is beautiful, most humans really don't understand the gift they're living on." The little monkey grabbed the arm of Kenshin, one moment they were staring at Earth, the next, they were on Earth, exactly where they had left from.
"This has been fun Kenshin,but I must leave. Da toon force duty calls." The little monkey tapped his friend on the head, hoped off his shoulder and was completely gone.

Yaaass :P
If you reading dis higgins, if you want, we can interact tomorrow(:

Space, space is always fun. "It's quite fun, I'm sure you'll love it." Kufu said as he grabbed Kenshins arms, and instantly they were in space. Kufu brushed off the laws of physics for the both of them, they would breathe and survive in space as if they were on Earth. A platform of blue light sat under Kenshins feet, it kept him upright, and from entering zero gravity, if he wanted to walk about, the platform would move and contort to keep him up and on the platform.
"Heheheeeeee!" Kufu yelled as he flew by the daimyo, an incredibly unsafe jetpack strapped to his back. It exploded, and Kufu floated amongst the wreckage.
"Space is pretty." The little money said as he swirled about in the jetpack debris.

Kufu listened intently, but his eyes wandered to the people around, in the beat up market. The city felt like it was a place of great culture to Kufu, but it did not look much like one. The little baboon sat happily listening, learning about the history of humans, he was there for almost all of it, but he had an odd memory."Ahhh, da toon force. Basically, it has existed ever since imagination existed. And imagination has existed for like forever. The toon force though, makes imagination real. I'm an avatar of the toon force, so I get that ability, to make anything I imagine real. Essentially, I is an omnipotent baboon."In order to demonstrate, Kufu hopped off of Kenshins shoulders, with a lit stick of dynamite in hand. He shoved it in his own mouth, and it exploded, his cheeks expanded outwards three or four feet, and smoke billowed out of his ears. "Hehee"Then, he climbed atop Kenshin's shoulder once more enjoying the site of the city.

"So, have you existed forever?" The noble asked, his eyes widening in awe as the little monkey performed his impressive trick, or not a trick, an surviving an actual explosion. "That must be an amazing life little one, I cannot fathom such power...Although," He chuckled, walking the baboon through the forest of the damned, "Do you ever wonder what it would be like to be "normal" or does the thought of that scare you?" He chuckled, "Normal...Is boring".

"Uh, well, I remember the big bang. Sort of, the toon force kinda washed my memory of that so I wouldn't tell people what really happened." Kufu tried to summon any memory he could muster of the beginning of it all, but came up with nothing. The little baboon sat and listened, and then wondered about how he always hated the thought of being normal. "I've thought about it, I even lived with baboons for a bit. I hated being normal, normal was no fun."
Kufu climbed atop Kenshin's head, and leaned over so his face was inches from the Daimyo's. "So. Is their anything you would like me to do for you? Anything you would like to experience?" The baboon asked and then climbed back onto his shoulder, interested as to what the answer of the ancient man would be.