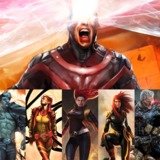 Always nice to have a backup....

POWERS and Abilities- While Rachel often displays a Phoenix Raptor, Energy Field, Eye Emblem and even uniform. She has only had the Phoenix Force during specific periods in her life. As such unless otherwise stated in my description I will NOT be including Phoenix Force Feats for her TK and TP abilities.

Rachel Grey has been stated to possess nearly unlimited telepathic potential. Capable of scanning minds around the planet, reading, controlling and manipulating thoughts, as well as shielding minds from other powerful telepaths. She can also astral project, send messages across great distances and enter and do battle on the Astral Plane.

Rachel is stated to have unlimited telekinetic abilities with many molecular level telekinetic feats as well as many powerful shielding, Energy blast, lifting and crushing feats. While recent depictions showcase her using Telepathy and Psi weapons, she has favored raw power and short shows of strength when angered or spurred into quick actions.

Molecular Telekinesis: Rachel has been established since she entered the 616 to be a molecular level telekinetic able to rearrange, dismantle and manipulate molecules at will. Something even the strongest telekinetics can't do. She's been shown to sometimes conciously and subconsciously change her clothing and appearance. She has also been shown to weaponize this ability into a powerful blast.

Shields: Rachel can create powerful Psi-Shields that can withstand explosives, energy blast and even orbital bombardment.

Rachel can use her psionic powers in various other ways, most commonly however is disguising her Hound Markings subconsciously. She also uses psychometry in tandem with other powers to track and reexperience events.

Since her first appearance Rachel has displayed the ability to send minds forwards and backwards through time. While this ability has not been used in some time, it has most commonly been shown through her Chronoskimming ability. Rachel has stated that without the Phoenix force to protect them it's difficult to bring bodies through time, but after learning to "manuever through time" from the Phoenix Force she was able to travel with herself and Cable across time without restriction.

Rachel is a former, and one of the longest lasting, host of the Phoenix Force. Having found her time traveling astral form after the events of DoFP the Phoenix would follow and lay dormant inside of Rachel for a time. After bringing her to this world the Force's power would be ignited by Rachel coming into contact with the essence of Phoenix Jean Grey. Rachel's power as Phoenix would continue to grow during encounters with Shadow King, Galactus and the Beyonder. After a battle with the sorcerer Necrom and his ancient fragment of the Phoenix Force Rachel would die and be resurrected by the Force and given access to it's full power.

With the power of the Phoenix Rachel can fly through space, open portals across vast distances, manipulate cosmic energy, and sense the fundamental powers of the multiverse. The Force also increases her natural mutant powers allowing her even stronger telepathy and telekinesis, while ampifying her Time Traveling abilities to the point she can traverse realities as well as time and space unaided.

PHOENIX ECHO: While in space pursuing the Omega Level mutant Vulcan, Rachel encounters a Echo of the Phoenix Force trapped in the weapon of a former Phoenix Force Host. After gaining it's power Rachel notes that it's less powerful, but easier to control then the Fully Powered Phoenix Force. She would eventually lose this power when the Phoenix began recalling it's pieces to the White Hot Room.

Mother Askani is a future version of Rachel Summers. In order to save the life of Captain Britain who was lost outside of time, Rachel used her ability to travel through time along with the powers of the Phoenix in order to switch places with the lost Brian Braddock. Rachel would be lost in the time stream for sometime before arriving 2000 years in the future where Apocalypse had taken over the planet. Rachel would begin a rebel movement based around the teachings of the X-Men which would become known as Clan Askani. After giving up the Phoenix Force in battle with one of Apocalypse's Generals, Rachel would have a vision of her brother Nathan Summers one day defeating Apocalypse. To help this future come to pass Rachel took the mantle of Mother Askani and prepared her forces for the arrival of Cable over 100 years later.

Despite her death Mother Askani continued to exist outside of time & space. She would frequently respond to the calls of Cable and members of the Askani clan in both the past and future and continue to shape the events of Cable's life and the battle against Apocalypse from outside of time.

After Apocalypse's death and his failure to gain the power of "The 12" that would allow him to conquer the world, the future timeline was erased and Rachel's personal history would be changed so that she wouldve become lost in the timestream instead of ever arriving in Apocalypse's timeline. Cable would rescue the now teenage Rachel and return her to the present with only vague memories of her experiences.

Rachel would eventually encounter Mother Askani who hinted that Rachel's destiny may still be to one day become her.

Phoenix Residue- Despite losing the Phoenix force 80 years prior, Mother Askani possessed some residue of it before her *death*. She uses up the last of it to turn Cyclops and Jean Grey's borrowed human bodies into mutants with their original powers, though the effort causes her to slip into a coma from her injuries.

Mother Askani possessed incredible psionic abilities able to telepathically reach out across time and space. She also could send the physical bodies of herself and other through time. After her death she repeatedly refers to herself as existing on "another plane of existence" and appears to be unrestricted by time and space as well as having a spiritual connection to her followers across even the multiverse.