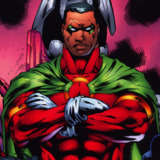 Christian Bale & Anne Hathaway was in my Hometown

Actors Christian Bale and Anne Hathaway was fiming scenes for upcoming Batman: The Dark Knight Rises in hometown. They spend two days filming, matter of fact they were filming right across the street from me and got people from the street to be extras (l'm kicking myself for missing my chance). But l did get the chance to both of them the next day l was hoping to get see them in costumes, l got small glance to see Anne in her Catwoman costume but not Christian's in his and l was not the only one either there must've been a hundred people waiting to see if he would come in the Batman costume . Here's a fun fact: Christian is not a tall man , l'm taller than him l always thought he was taller

Why is it when a good person get superpowers they always seem to be reluctant or apprehensive about what to do with it  while somebody not so good, a criminal,get superpowers also they on other hand loves it and not afraid to use it  while the good person afraid people gonna think of them as freak or something . Then something happen and then start use their superpowers

Which one are you ? if you gain superpowers would you automatically becomes a Superhero or a Supervillain


Would you watch an American version of " Doctor Who " ?
14 Comments


Let me say first, I DO NOT APPROVE OF WHAT HE DID ,  l like to think he didn't do it but time would tell , so what is your thoughts on the subject ?
98 Comments

What do find that is nerdy ?


People call us nerds because we like comic books , sci-fi movies or fantasy books etc . (we're not ,they are) . An l want to know what do find nerdy ?
20 Comments

Men : do you suffer from Women's Logic


To all the men on this site ,  do you suffer from women's logic ?  you may call it something else but it's all the same.  For Example : let say you  want go with your friends , but you're wife or girlfriend says no you and her have huge arguement about it and you still don't go but the next day (or next week whatever)  you're wife or girlfriend want go out with her's friends and you said no but guess what she still goes ....................what the hell !!! how did that happen ? women's logic , that's how . No man can beat it or understand it but somehow we men lose to it every time   Do you have something similar to this ?, l'm pretty sure that each man here have, presently or in the past and how did you deal with it ?
195 Comments

Immortals of the DC /Marvel Universes


l'm a huge fan of The Highlander, the movies and the TV show , in it they got a rule , they can't fight on holy ground  between the Good and the Evil mortals but l also think  there another rule that they must protect each other from mortals . l mean to make sure people (mortals) , don't find out that they are immortal because if people find out there are other people who are immortal it wont be long before they be hunted or experiment upon . And it got wondering about  the DC and Marvel universes and theirs immortals and long lived humans , people who are not immortals but have extremely long life,  do they have a rule to protect each other l mean the Good ones and the Bad ones. For example, would  Vandal Savage protect Arion if people find out his immortality , probably not  but if it threaten his surival ?........ who knows
1 Comments

Vigilante Justice : can you take law in your hands ?


The Punisher and The Vigilante both men who takes the law in their own hands because the so called System failed  them . It got me wondering about our Justice System would our cities be more safe or less safe , if the Police be more proactive and stop criminals before they commit their crimes . C'mon the police sometimes either ( l'm not saying all the times )  knows the who, the why , the how and sometimes the where but because of  the system they can't act til the crime be commit . Logical says that we be more safe , that sounds good in theory, but if you factor in the human equations,  we won't known until after we implement  it to know the consequences. An if it's going down the hill how long would it be before we take vigilante justice to protect ourselves , in my opinion not very long

you agree or disaree
5 Comments


Sometimes, when I got nothing to do  I like to fantasize that I start my own Comic Book Company called Trinity Comics , because after The Big Two I'm  the third Largest .  And  l created  Brand New Universe of Super Heroes and Villains , l got my most Powerful and the Greatest  Hero name Quest , the mysterious and deadliest detective name Night Ghost and  the World 's Famous Super Team called Heroic Seven  and few others . I know it never gonna happen but  it never hurt to dream  , l just wondering if l'm the only who do this ?  think of new Super Heroes and such ,  So l'm wondering if you guys or girls have  any fantasy similar to mine ?  Do you have any names
Heroes ,Villains ,  Supporting casts , other Super Teams (super heroes or villains)  ,names for the Heroes's Cities, Other Worlds, Aliens Races etc.

Hero or Sidekick : Which one are you ?

Which one you think is your Personal Traits  ?

Are you a HERO ?
can you make a decision and live with the consequences , even when you know it's bad one and people might get hurt because it
OR
Are you a SIDEKICK  ?
do you allowed other people make you decision for you , and constantly worrying you it's the right decision , because if 's it  not you can blame person(s) who made it

The reason I ask this because  we all think if it coming down to it we be the hero we think we are, but when a situation arise are mind go blank and we don't know what  to do until somebody else take charge , an when it 's over we be kicking ourselves because of it  . So I want to know , are you a HERO or a SIDEKICK ?  do you got  what it take ? well , do you