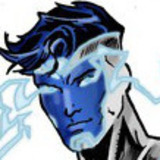 Cop of the Multiverse

Real Name: Maximus Harvey (Put together, the meaning of his names are: Greatest Soldier)

Base Of Operations: Mobile

Citizenship: Austria and the United States

Education: Equivalent to the Austrian Army level of education

Physical Form: Max is very tall for a native of Austria and due to his constant weight lifting, he is also extremely muscular. He could have been a professional body builder, but chose not to take that career path. Max bears a strong resemblance to Arnold Schwarzenegger.

Human Form: While Maximus is in his human form, he is just as vulnerable as a human is. If he is in his armored form and loses consciousness, he reverts back to his human form.

Anti-Gravity Belt: With a mental command, Maximus can fly with his Anti-Gravity Belt at approximately 300 mph and at an altitude of 35,000 ft. The belt has built-in protection against EMP’s.

Finances: Max keeps his finances a closely guarded secret. However, it is suspected he has socked away quite a bit of cash in his overseas accounts (which are heavily encrypted) in case of a rainy day.

Vehicles: Maximus has access to a number of military styled vehicles such as Jeeps, Motorcycles and the like.

Wrist Blasters: Resembling red bracers, Maximus usually wears a pair of these while in his armored form. These Wrist Blasters are capable of firing focused lasers in the form of bolts or pulses, at his target. Each bracer has a series of hidden buttons, giving Maximus the option to either stun (knockout) an enemy or kill. In certain situations, the Steel Titan is even capable of modifying his wrist blasters to explode. The explosion is equal to that of a grenade. The Wrist Blasters automatically recharge by feeding off the nearby ambient energy and they also have built-in protection from EMP attacks.

Other Equipment and Hideouts: Maximus has used his contacts in the German Military, underground and with other mutants, to get his hands on state of the art military issue equipment. Everything he has acquired has been through legal and legitimate channels. What he couldn’t get, he simply built himself (mini-guns, for example). He has permits on most of his weapons so he cannot be arrested for carrying an illegal sidearm either in public or captured while on a mission. Max has enough weapons spread throughout his hideouts to outfit a small army.

Maximus has a small number of hideouts strategically located throughout the world. Each one is carefully hidden and located underground with heavily encrypted codes to prevent entry. Each hideout contains various equipment Maximus might need on his missions. Things such as night vision goggles, scuba gear, walkie talkies, rations and anything else he might need.

Maximus Harvey was born in Austria and grew up in a low income home of 8 children. Due to a mutant terrorist attack in his late teens, his family was killed but he alone survived. After that, he was old enough to enroll in the German Military and there he served for the next several years. While in the military, Max learned how to reverse engineer any piece of military technology or weapon. He was considered an intelligent and brave officer who could use any military sidearm.

The Germans were experimenting with a machine that collected cosmic rays and mixed those rays with other types of radiation. Maximus was stationed as a guard one fateful night when the cosmic ray machine started to malfunction and go into meltdown. Ordering everyone out, Max exposed himself to the cosmic rays and the other radiation the machine produced in ordered to give everyone time to evacuate. Max’s meta gene activated and he gained super human powers.

Little did Max know, his superiors planned everything and were hoping their experiment would result in some form of Ubersoldat, or Super Soldier. When Maximus began displaying signs he had gained super abilities, the German Military put him to work. They code named him the Steel Titan since he seemed to be made of super durable steel and because he was so tall.

Maximus served two additional tours of duty, in addition to the one he already completed, as the Steel Titan. While the Germans were extremely pleased to have such an asset working for them, along with many successful missions, they were also frustrated that they couldn’t replicate the success in their attempts to create more super soldiers. Finally, after so many failed attempts the project was scrapped and Maximus was discharged from the German Military as a failed experiment.

Finding himself out of the military, out of a job and with nothing to do, Maximus decided to move to the Unites States and become a Bounty Hunter and part time Mercenary after he became a U.S. Citizen. He found that he was very good at this job and has been doing it ever since.