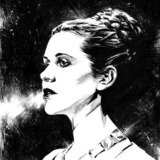 This is my second respect thread, this time covering the Jedi Padawan Eldra Kaitis from the Star Wars: Darth Maul (2017) comic. I was inspired to make this after reading the comic recently, as Eldra reminded me of my favorite character, Ahsoka Tano. Eldra Kaitis seems like a strong-willed individual that would have had a bright future in the Jedi Order if she hadn't been killed by Darth Maul, but alas, at least she showcased some serious skill in her final battle. So I hope you enjoy my second, albeit very small, respect thread!

I also recommend reading this respect thread in blog format.

Darth Maul mused that Eldra Kaitis was well-trained and would have become a Jedi Knight soon.

She has been well-trained by her masters. She would have surely been accepted as a Jedi Knight soon.

Eldra Kaitis is still alive. She might be only a Padawan, but she is cunning and resourceful.

Darth Maul mused that Eldra Kaitis took advantage of his overconfidence and implied she had a strong will.

She surprises me... takes advantage of my overconfidence. I thought she was finished... defeated before the battle had even started. But I misjudged her. I underestimated her spirit.

Darth Maul suggested that Eldra Kaitis likely deserved his respect and at the least demanded his attention.

The Padawan demands my attention if not my respect.

Eldra Kaitis displayed agility when fighting Maul and pirates by jumping over them.

Eldra Kaitis survived an explosion detonated on the ship she was on and the crash on the moon of Drazkel.

Eldra Kaitis tanked two kicks by Darth Maul, one in the torso and one in the face.

Eldra Kaitis might have been a Soresu user, as Darth Maul's inner musings regarding Eldra Kaitis's fighting strategy revealed her having a very similar approach to dueling as Soresu practitioners.

She defends--yes--but I can see it in her eyes... in her movements... Eldra Kaitis is biding her time... waiting for the perfect instant in which to strike.

Darth Maul mused how if his concentration lapsed, Eldra Kaitis would strike him down.

A lapse in concentration... one misstep... and she'll cut me down.

Eldra Kaitis held her own against Darth Maul in a narrow contest where both fighters scored hits. Eldra Kaitis managed to slice Darth Maul across the chest with her lightsaber, but in the end, lost to a cheap-shot.

A lackey of Xev Xrexus reported that Eldra Kaitis proved to be a significant challenge to those hunting her.

It appears the Padawan has proven a significant challenge to the hunters.

Darth Maul mused that Eldra Kaitis was strong in the Force.

You're hiding something... or from someone. I can feel it. Who are you afraid of?

Eldra Kaitis accurately threw her lightsaber at a vulnerable point in the stone behind Darth Maul.