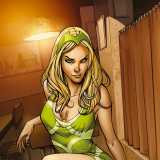 this is my best Character becuase he really isnt based off of anyone!

His Father before him was a hero for the light, a hero that sought to heal and make better. One Day his light was snuffed out and Oliver was there to witness it. During this moment Oliver discovered that he was also destined to become a warrior of the light and used his powers and his fathers sword to vanquish the demon that killed his father, Mother, and Sister. He knows not what to do with his power or how to fully use it but he does know that he has power within him

His Family (Dead)Olivers family was a balance of light and dark. his mother was the darkness, his father the light, his sister the darkness, he himself the light. One Day a Demon came in hunt of Oliver. His parents both Sacrificed them selves to Save Oliver and his sister Cynthia. Cynthia and him made a pact that day, They would work together until that demon was destroyed, and when they caught up with the demon they were ready to kill however the demon had gotten stronger and in the end Cynthia had to sacrifice herself for Oliver to Kill her. it was then he realized that there are different shades of dark, the Dark can still be good! What hurts even more is that Oliver could have saved his sister he just didnt realize it until it was too late!

His SisterCynthia was precious to Oliver. She left the house at fourteen she came back at 15 raped and beaten. Oliver swore to himself that he would find the bastard and kill him. and When Oliver found the man he couldnt bring himself to kill him. But these events set his sister on the path to becoming a force of darkness, one that differed from Oliver in so many ways, one that his sister sought out and was trained by their mother!... Oliver was trained by his father. Oliver wants to be able to manipulate twilight (the combination of light and dark) but after his sisters death he never brought himself to do it.

His sister "Cynthia" always cared for Oliver and she loved him but she always felt he was misguided in his choice of choosing the light over dark. She and Oliver fought the demon that killed their parents and in a key part of the fight Cynthia sacrificed herself to save Oliver!

he was thrown into the sun and vaporized.

while he was certain that he was going to die in the sun a sudden Black Shield surrounded him. a voice rang out "its not your time brother, you must live!" he knowledge go into his head and started to manipulate Darkness (basic for now!) and soon started to fly out of the sun and back to Earth. he comes to find out what is new with the world and its problems!

Olivers Family was quite wealthy, and he recieved a rarther large inheritence a total of 1 billion dollars. plus the 500 million from his sister has him sitting quite well. though he refuses to spend almost any of it.

Amount invested in assests and other things- 500 Million

Can ManipulateLight in the form to make himself invisible and such also can create light illusions, and has a light Aura!

he can read thoughs and such, and can even "suggest" actions to others with absolutely no mental defense. otherwise he will have try hard. he is by no means an excellent telepath!

Oliver can sense Emotions and can detect lies (sometimes he gets it sometimes he doesnt!)

he has enhanced senses

can shoot energy beams (part of his manipulating Light)

he can heal others (can not resurrect them)

he can use light energies to heal wounds. while he can use this on himself it was meant to be used more on others

he can also create light constructs, but not very well yet (think GL constructs)

due to being connected to light he moves at Super Human speed!

can cloak his movements

(may or may not learn this. it is a combination of light and dark!)