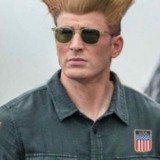 A Long Night at the Graveyard...

Inside an old gym, Kristoff Goulding is doing his usual late afternoon routine when he’s not on a case; punching sandbags. “Hey Jeff!”, Kristoff said. A buffed young man came to him. “Need sumthin’, K?” “Could you bring me my bag over there just outside my locker? I’m quite on a roll here.”

Jefferson Rufus is a young assistant to the place’s owner, Mister Big they called him. He’s been there for 5 years, and 5 years Kristoff’s friend around the place.

“You sure still pack a lot of punch mister K. You almost cracked the last sand bag I placed there.”, said Jeff while on his way to Kristoff’s locker. “Oh yeah? Wait ‘till you see me again fighting inside the octagon one day!” replied K’ while continuously pummeling the old sand bag. He then positioned himself at a southpaw stance as he waited for the sand bag to get close to him after his last blow on it. Twisting his left fist as if coiling, gripping hard, he then released a sharp-straight right at the centermost body of the punching bag causing an echoing sound inside the gym that startled Jeff, as he picks up his bag.

“Yeah mister K, you sure still got the moves there.”, said Jeff. “You see, strength is not always everything when fighting, Jeff. It’s more on timing and adapting. I may be aging but my timing is still clean.”

K then prepared himself, hit the showers quickly and returned to his locker with his bag. The gym is quiet by the time he finished. White noise coming from some fans are heard, but not a footstep can be heard nor doors opening or closing. He put the bag on a bench that is clear. He then viewed some messages on his phone but did not replied to anyone there. But as he lifted his bag from the bench, a small envelope fell on the floor.

As K noticed it, he attempts to pick it up slowly, because he finds it weird to see that thing which he believes does not belongs to him, and nobody else could have left it. Before his finger touched the envelope, he was startled by the sudden opening of the main double door. “Oh mister K, I already switched off the lights at the other rooms. Just shut the breaker before you leave. We don’t want Mister Big naggin’ at us then about the bills again. See you around!” said Jeff as he left the gym with a few switched on lamps across the hallway to the main double door. K just smirked at Jeff, “Yeah sure. Whatever man.”

He picked up and the envelope and opened it. “A blank envelope?” he murmured. As he opened it, he felt a slight chill coming from his toe upward as if a breeze could be felt from the gym flooring. Pulling the paper inside, he noticed one thing that immediately changed the mood there… it bears the seal of the Air force of America. Soon as he finished reading, he realized that he’s being summoned at a certain place at the Mojave desert, with only coordinates and small map given together with the letter. “Probably from Colonel Richards… well at least it isn’t as urgent as those orders from U.N.G.” he said to himself.

The simple letter is a request summon from someone unspecified from the high ranks of Air force, which K has a good idea who created it. The mission briefing will be held at the said location, and as usual, it bears also the “classified” stamp. Weird thing for K is that some information is missing from a common summon; no date of deadline, no type of mission indicated, and not even the name of the specific person of author. Kristoff then picked up his stuff, shut the breaker at the gym, and exit the place. He went to the parking area and get to his big bike, wore his jacket and left.

The sun is still a bit high then, even if it’s late afternoon. Kristoff drove the city and along the last exit he gassed up before hitting the dusty high way. He’s travelling at around 70 miles on his 900cc bike. Strong warm wind blowing at his face, and as he get closer to the coordinates, less and less vehicles and sights were around. The sun is setting fast, as if racing him along. K felt more and more anxious. The desert is getting creepy by the moment. The moon started to appear even if it’s still late afternoon officially.

For some time, not a single vehicle was in sight. Deep in the Mojave he made another exit to an “emptier” desert and the moon starts to brighten up. The sun is dead set.

Finally, K reached the coordinates. It’s an empty barren desert with some twigs and cacti can be seen. K drove a little further. Until he saw something… a sign of life… a light out of the slowly-darkening desert… a beacon of hope to any man travelling there… it’s, wait…, it says Graveyard?

And the wording is not on a stone, but appeared as a mix of colors red white and purple pale lighting. “A tequila bar… near the Mojave… along an empty barren desert. Well, it’s weird and all but I think I’ll investigate the place anyway.” The sight of the tequila bar made Kristoff almost forgot the reason why he travelled all the way there. He’s not the type who would get easily loosened up on a mission and let his guard down, but something in this place… this area… at this specific time of day pulls his seriousness off his system and simply… Indulge!