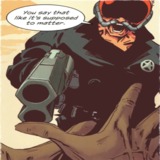 I need help remembering a comic series I read I want to say in the mid 2000's. It wasn't a long running series and sorry if I'm a little cloudy on exact details, it's bee a while. Don't remember if it was Image or darkhorse, maybe something else but def. not marvel or dc.

This has been bothering me for a week and I can't find the title anywhere online. Any help would be appreciated

I haven't read any of the comments but knowing the comic vine community this thread will be very subtle and nuanced in how people approach and talk about race.

I wonder if their music choices for trailers will carry over to the tone of the movie.

Huge drop off on the second week though.

This is so funny because the movie is actual trash. Denial is the first stage of grief and it's only been 2 days since the movie came out. Give it time and ultimately people will get to acceptance that Batman v Superman is a mess of a movie.

There was a comic series that had a short run in the early to mid 2000's. It took place in the future, a crime story of a group of people to catch someone (I think) the first issue had a priest who had hostages playing Russian roulette with the main guy (who I think had a robot arm) and there was a part in the second of third issue where the main guy was chasing a guy between subways. Also the art was similar to Powers. I only have bits and pieces to go on, I think it might have been an image book but I've looked through image books in the 2000's and nothing is coming up that matches it. Any help would be appreciated.

"if you want superheroes that inspire people, this film is horrible for that". Oh so these characters aren't actual heroes then? Very good base to build a universe of children's characters on. Very glad to not be seeing this.

I picked some good bits from a review I enjoyed:

"It’s almost crazy how flimsy and poorly constructed the first hour of the film is. Snyder and his editors seem to have inserted scenes haphazardly; while most take place in what seem to be chronological order there is no flow from one scene to another. The movie hops around from Batman to Superman to Lex Luthor to Lois Lane willy nilly, with no regard for the pacing or with building any kind of momentum.

Here’s a specific example: we cut to a scene of Perry White in the Daily Planet offices, and he’s looking for Clark Kent. “Where does Kent disappear to?” White asks. “Does he click his heels three times and show up back home in Kansas?”

You can probably guess what the next cut will show us - Clark (or Superman) in Kansas. But not in BvS. Not in a movie that seems to aspire to anti-cinema. That scene is immediately followed by Lois meeting a secret source. I think the next scene after that is about Lex and then there’s one about Batman and then we come back to Superman. This lack of a structure makes the entire first half of the film feel like a bloated montage; everything is disjointed, nothing is clearly connected to anything else."

"The one bright spot in the film is Batman.....His relationship with Jeremy Irons’ Alfred is delightful......I hope that whatever damage this film does to the DC Movieverse we still get a Ben Affleck Batman film, and I hope Irons has an ironclad contract to come back."

"Gal Gadot is fine as Wonder Woman, playing a character without any depth. She seems cool in battle? That’s about the big takeaway from this character in this movie. I look forward to seeing what Gadot can do in a film that perhaps has a script featuring humans in it."

"Everybody in this movie is running around talking about what Superman means or what they’re going to do to Superman, but Superman himself has no goals, has no desires, has no role in the story except to stir everybody else up."

"Eisenberg is next-level terrible as Luthor. He’s a twitchy lunatic pretty much from the start, and if there are any events in the story that lead to him escalating his plot to the point of creating an unstoppable monster I missed them......while I don’t understand why Lex Luthor wants to unleash an unstoppable monster on the world, I do fully understand why Batman wants to hit him."

"Instead of walking back Man of Steel’s wishy-washiness about heroism, BvSdoubles down on it."

"His Superman is an asshole, a pompous and condescending jerk who makes threats. Even the scene where Superman might have a chance to deliver a heartfelt explanation of himself in front of a Senate committee hearing is cut short"

Sounds like a messy movie with hopes for a good Bat film in the future.