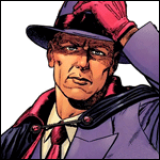 2. Harley Quinn. It was nice to add the bar scene to show she has depth, and not just Ms. Fanservice with a baseball bat.

3. Amanda Waller. They captured her perfectly.

1. Deadshot. Will Smith was once again playing Will Smith.

2. Enchantress and her brother. Not only they were cringeworthy, it makes no sense to send the squad of mostly powerless villains against them.

5. Fight scenes. Too dark to realize who's fighting who.

@thor-parker: I only saw the first season of the Agents of SHIELD, and never had the time to watch Gifted and Legion. I'll add them once I watch them.

@cbishop: better than the Titans episode. I have to warn you though; if you like action-oriented TV series, the first season of Doom Patrol is not for you.

Thanks for defending Kirito.

Bentley 32 - a clone of the Wizard

Spock is not 'normal'. As half-Vulcan, he is thrice as strong as human.