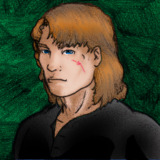 Stone felt like someone had ripped out his spine and rammed it back in through his butt hole, as he took another agonizing step down the parallel bars walk. He'd hated people before, he'd hated terrorist butt wads, he'd hated wife beaters, he'd loathed people who hurt children, and oh how he'd hated his Delta qualifications cadre, but this physical therapy lady deserved a special place in Hell. Every muscle in his body was quivering like jelly, and every nerve wailed in pain, but still she kept up with her sadistic..."Just one more step."

After another week, "one more step." became more and more bearable, he would walk on his own further and further down the hospital's hallways. Before long (well against medical advice) he was able to clip into a light jog.

Once home, he was able to try out his new "features". He detested having artificial parts in his own body, but since he had them he'd need to know he advantages that might help save his life.

Stone's feet were flat on the ground and the tips of his fingers were touching his heels, as his palms were supporting his wait as he easily bridged himself. His new spine was not only incredibly strong, but amazingly flexible. He found that in addition to his tremendous spinal flexibility, a link to his inner ear also improved his natural spatial awareness. No matter which direction his body was facing, he knew exactly where he was in relation to the ground, and his body began to naturally correct itself outward from his spine. He found that he had to actually had to intend to fall to the floor to do it at all.

"Pretty is as pretty does." Stone replied, "There are worse things than having the flexibility and balance of a gymnast."

"I'll be sure to warn Simone Biles to watch her six for Tokyo."

"You're gonna end up getting that coal out of your stocking one of these days if you keep up that kind of good behavior, y'know"