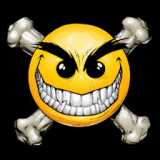 There are two types of people, those who like Teenage Mutant Ninja Turtles and bad people.

Vargas and Angus had been walking for two days when they came across a huge net made from thorny rosebud covered vines. Angus grew a bit anxious, "This looks familiar."

Vargas sliced the nearest vine and pulled Angus back as a tree dropped right where he was standing," Alana loves her traps."

Angus looked around at some strange markings on the trees then back to Vargas, "We're in Bedo's territory. He's got a damn army with him. If your girl is fighting them she's as good as dead."

Vargas thought about it for a moment, "You know, Bedo's bounty could probably buy a lordship. It'd certainly keep me well supplied for the road."

Angus shook his head, "What you're paying me ain't worth dying for."

Vargas then pulled out Bedo's wanted poster to show the bounty, "I'll give you half."

Angus looked at the amount with a nod, "Alright, lets go kill us some bandits."

A woman with bright red hair and emerald green eyes stared hatefully at nearly a hundred bandits being temporarily held at bay by her mesh of thorny vines. She held her daggers tight at the center as she looked for an opening to attack or flee.

A large man holding a cutlass yelled to the men, "I'll give triple rations to the man who brings me her blades."

As she prepared for a rush she heard a whistle from behind her. She turned her eyes in its direction to see Vargas giving a wave. She yelled back, "The bounty is mine!"

Alana sighed as he and Angus stepped up. She glared at them, "You gonna help out?"

He gave her a blank stare for a second before she growled, "Fine, three way split."

Vargas looked to Angus who nodded, "A third is still more money than I've ever had."

Just then several men broke through the vines. One stood ahead of them all, "You should run fellas, or face the wielder of the Wolf and Coyote."

Vargas got a grin as he put his hand on the Wolf's hilt, "Is that so? If that's true then we should be worried."

Alana chuckled under her breath as Vargas turned to face the bandits and continue his speech, "They say the Wolf can shatter steel like glass and the coyote can level a forest. With their power combined, rumor has it they can split a mountain."

The bandit nodded, "All true."

Vargas shrugged, "Not sure about the mountain thing."

He then pulled the Wolf from its sheath and shattered both the man's swords in one stroke while the sound of a howl echoing through the forest. He then aimed the sword at the man, "This was just bad luck for you all round, fella."

Bedo gripped his cutlass tight as he shouted, "I knew that son of a b*tch was a liar, but the Cobra's Fang is real enough."

Angus pulled out the Changeling and it grew to a broad sword. Vargas then waved the Wolf toward the crowd of men sending out a wave of energy followed by a growl that sent them flying, clearing a path between himself and Bedo.

Bedo aimed his cutlass toward Vargas sending the form of a coal black snake. Vargas struck its head away before it could bite but left himself open for a hard strike to the face from Bedo's ham like fist. Vargas staggered back a few steps, "You're quick for your size."

Bedo nodded as he swung his blade. The Cobra's Fang clashed with the Wolf as Bedo looked down at the sheathed Coyote, "Aren't going to use that?"

Vargas pushed him back, "If I have too."

He then slashed across Bedo's chest but he managed to avoid a fatal injury. Bedo looked down on the blood dripping from the wound, "You'll pay for that."

As this was happening the rest of the bandits moved to attack Alana and Angus. Alana pulled her blade back and flung her vines like bullwhips into the crowd. As the vines hit her attackers they wrapped around and crushed them. Angus was immediately overwhelmed but his sword expanded to shield him. Spikes then emerged killing those in front of him. More came forward but the Changeling suddenly seemed to become liquid before enveloping Angus.

Angus looked down as his fingers became metallic talons, "This is new."

He then charged into the crowd to test out his new armor. Bedo saw his men falling and grew angry. He began spinning his cutlass creating dozens of coal black cobras that shot out in all directions. The mass of snakes crashed down toward Alana, Angus and Vargas like a tidal wave.

Angus was unharmed but knocked away by sheer force. Alana quickly wove her vines into a shield but one made it through. It missed its bite but burned her arm as its tail lashed. Vargas was nearly swept away but raised the Wolf just before being hit. He shouted the word, "Howl," as they came down.

The Wolf's howl hit the wave with a sonic blast that destroyed them instantly. The remaining bandits were hurled away and Bedo was launched back into a tree. The last sound he heard was the sound of his skull crunching against the trunk.

As the surviving bandits crawled away, Vargas started walking around collecting their dropped weapons. When he came to the Cobra's fang he pulled a gauntlet from his bag. He could still feel the heat from the hilt and had to quickly stow it to keep it from melting through.

The Changeling shrunk back to a small pocket knife. Angus walked over and tossed Bedo over his shoulder, "Nearest Marshal outpost is three miles that way."

Vargas looked to Alana, "You coming?"

She nodded, "A third of the bounty is mine."

Vargas then chuckled as he looked to Angus, "See, she can't resist me."

Belial and Harris found themselves outside a small Marshal's outpost. Harris looked the place over, "I got a bit of a bounty. This may not be a great idea."

Belial rolled his eyes, "There is a prisoner in there who took down six entire divisions of the royal army alone. If they hadn't caught him in his sleep he'd have never been captured. I intend to enlist him."

Harris shrugged as he unsheathed the Dragon's Tail, "You're the boss."

He swung his blade sending a wave of dark blue flame crashing through the gates. The few marshals inside ran out to defend the place but Belial waved the Reaper's Arm causing them to rapidly decay into dust. The two then casually strolled to the cells.

A tall thin man with long braided blond hair sat on the cell cot with a foot propped on a small stool as the two approached. He sneered a bit, "Hello Belial."

"Paimon, my dear friend. I've come to free you. That is if you agree to join me."

Paimon sighed, "You found the scythe. Very well, but I expect to be entertained. They're keeping the Red Tiger in a safe two floors up."

As the three left Paimon unsheathed his katana Red Tiger. He turned and slashed toward the outpost. A red beam of pure energy swept across the place destroying everything it touched. He then kissed the hilt, "Good girl."

Gunnar and High General Marcus stood before the crown prince, Edwin who gave them an eye roll as Marcus spoke, "The reports have been confirmed, their is a new wielder of the Reaper's Arm running free. I suggest you put the royal army on high alert."

The prince gave a yawn, "That sounds more like a Marshal problem. The royal army has more important matters to attend to, now move along. I've got important business...."

Gunnar stepped up to the prince and back handed him hard across the face knocking him from the throne, "I'm tired of your s**t boy. Maybe your father didn't tell you, but your position is ceremonial. Your job is to wave at parades and let the people have something to gawk at, this meeting was a courtesy. I ever hear that disrespectful tone in the High General's presence again, I'll cut out your tongue."

The prince had tears in his eyes as he wiped blood from his nose, "You can't treat me...."

Marcus cut him off, "You don't need a tongue to wave to a crowd."

A royal guard whispered to his partner, "Should we arrest him."

The head of the ruling counsel shook his head as he walked past the guards, "Well this seems to be going wonderfully."

Gunnar looked back, "He'll be fine."

As the prince ran out Ian sighed, "He's gonna be crying about that for a month. Just got a report that Paimon has escaped from Marshal custody. He was aided by two men, one of my men told me all signs point to the Reaper's Arm being used. It isn't confirmed but they believe the Dragon's Tail was there too."

Gunnar dropped into the throne, "That's no good."

Vargas and Angus sat at a table in an outpost inn with a large meal in front of them. Angus looked over after swallowing a bite, "I think bounty hunting suits me better."

Vargas put down an empty mug, "Glad to help you find a new calling."

As they ate Alana sat down and looked to Vargas, "Where are you heading?"

She sighed, "Well, I have a room for the night. I'm still not gonna marry you but if you're interested I'm heading up."

He grinned, "You think I'm that easy?"

She gave him a wary look as he continued, "You're right. Good night Angus."

Angus nodded as he dug into his plate.