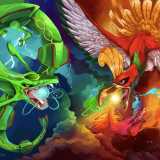 hmmm Ben Affleck not a bad choice, but too old right now and although he has daredevil and stuff kinda makes a point for it, still not exactly the best choice I guess... also I wanted a less known actor AND
a younger dude! he is 41, he's too old!
Now I'm pretty sure Snyder is gonna pull a the Goddamn Dark Knight Returns

ALL the Wolverine Haters are just Deadpool in disguise.

if I was a girl I'd rather be a brunette with blue eyes than a blonde. also Wondie as a cooler body if I was a woman I think that's the type of body I'd want - plus her powers and SWORD and SHIELD YEAAAA

also if Wondie turned lesbian, which I'd be, it wouldn't be as out of place. ya know, Amazons and all

did I mention Amazons? yea, Wondie could also have acess to an Island full of beautiful athletic women

PS: the first thing I'd do would be to tell Steve, Clark and Bruce off. "I don't like men, GTHO and don't call me back"

Dialga, Palkia or Giratina. pick one

or Arceus with the Dragon Plate, if you want to go overkill

@fallschirmjager: Interesting points, though in Batman Begins I think it was rationalized that he was not killing him, simply not saving him.

yup, it's this. he has the obligation not to kill but he has the right to choose not to save. something like that

I really can't understand people who say that scene where Superman kills Zod is good. ok, you guys have your opinions, and the whole killing thing is a bit subjective. It's okay.

but me.... I didn't feel any emotion there, not even one bit. I mean, I don't know if was Cavill's performance or the way the scene was put together, it just seemed silly to me and not dramatic at all. specially if RIGHT AFTER you show Supes smiling and all happy. I really really didn't see any GUILT or anything close for that matter.

also the scream he let out was ridiculous IMO. It felt so fake. that's just my opinion though. I guess other people have different views on what dramatic and mourning and etc... is or looks like

I have many more problems with the ways things were set and made but eh... I'll give it a rest. I may not have liked it as a Superman movie but

it's pointless discussion; the movie is made, it was financially successful and there will be a sequel. All I can do is enjoy what good the movie had (which did plenty, but all the bad I saw kinda turned me off a bit), appreciate it as an action/super hero movie like it was and hope the sequel is way better.

I still give it a positive note but it's not in my top 10 CBM or Super hero movies.

I actually heard Iris is coming with Ash to the Kalos region in a surprising twist of events.

not sure about Cilan though, he might be replaced

Are you talking of Best Wishes aka Black and White? It is a mixed bag again. It has its great moments like what did with Team Rocket making them threat but as Death Certificate points out they do things that Ash should have known long time ago which leaves us frustrated.

actually I was talking about the series in Kalos (based on France, it's the generation 6 region)

But Best Wishes was good too, the only problem was they tried to please the younger audience so we have weird stuff like Ash not knowing what a Squirtle is and having to scan it with the Pokédex (for the young kids who never played gen 1 or saw the first seasons)

plot wise it's much more consistent and character wise it evolved considerably, I expect more of the same for the new season

it wouldn't necessarily kill his stories but...

why? I'm tired of seeing old established characters getting unnecessary changes for no good reason. if you want to have a gay character, make a gay character, don't turn a previously existing character into one! same thing for every other aspect of a character

All Star had a gun? Did not know.

this. I knew he had one in the Golden Age, but I never read all star so I had no idea he had a gun in that

No, and your friend sounds like a moron if he believes lacking a gun renders someone a pussy since its actually the opposite since any pussy can fire a gun.

Hancock got drunk so he can get intoxicated. But MoS Supes isn't exactly very smart so it would take a while to understand this. I'd still say Supes wins