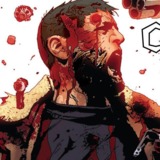 "Lets just say, you know, pretend. Like....a myth yeah a story, a myth. Ya know? The Bo-Veras. Lets just say that their villainy goes back further than some of the most recognizable names in American history. Not the current iteration of brothers. No. Not them. Momma Bo. Now that motherless jackal. Well. Lets just say she looks exceptionally well for her age. Legend has it she first appeared in the south western territories around the first half of the 19th century."

"I heard she was a half Negress half Cherokee medicine women who's own people exiled her for worshiping a false god."

I heard she was the leader of, get this, a band of outlaws known as you guessed it, the Vera brothers. I should stop cause this is all rumor anyway. But boy. If it wasnt? The horrific nature of them boys would have been enough to send shivers up Satan's spine."

"Shit. They were just the tip of the sword. Momma Bo's real power lied with that damn cult. The Blackfire Cult of Cutter's Canyon I believe is how that one poem tells it. Bunch of crazy assholes running around kidnaping, torturing, mutilating, lighting poor folks on fire and killing in the name of....dammit what was that name again.....some Akk ..adian god, Ezickel... Ebba?"

"That aint it dumby. Erra. Erra was the name. Ancient Arcadian death god or some such shit. Real end of the world stuff."

"Thats it. Real tragedy what they did to all thems people. Those who werent murdered or missing packed up everything they could and vanished themselves. One's who didnt get drug off into the woods."

"Yeah. What bout them two brothers?"

"Close enough to be."

"One of em road with the damn Bo-Veras didnt he? Legend I hears says his family name was Hill."

"No no. I heard this singer down in El Paso sing a ballad that dare say Momma Bo that boys real mammy. The exiled Cherokee had a kid with her. He waddnt no Hill. Daddy's last name may have been Hill but that boy real blood all Bo Vera. Best believe. She exposed him to all that ritualistic nonsense. Indoctrinated the poor bastard *&^%d his mind all the way up I bet. But Momma Bo double crossed him. Crossed him up good and %$#ing proper story goes. Real sadistic shit. Sacrificed him alongside his family. Made him watch as they violated everything a man holds most dear...."

"But what if the stories are true? What if some acts of hate are just to evil to die?

"Oh would you shut up. How would something like that even work? Hell. What the hell would such a sacrilegious entity even be up to if it were out here walking around? Or would he be on horseback? This day and age? Jackass."