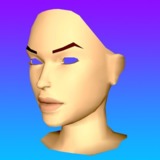 Eating a donut as big as your entire hand = interesting experience

The Psylocke is stunning.

Some things I picked up from online reviews:

It’s as if Ayer had too many balls to juggle and when they all came tumbling down he said, “Well that’s still kind of cool.” Cool? Maybe. That doesn’t make it any less disappointing.

Suicide Squad is just bad. It’s ugly and boring, a toxic combination that means the film’s highly fetishized violence doesn’t even have the exciting tingle of the wicked or the taboo.

Oh, and don’t even get me started on the pop music. There’s a way to do it, like Guardians of the Galaxy — and there’s a way to make your movie sound like some sort of old compilation rock CD they used to sell on late night infomercials.

I'm actually going to check this out. Love the line up (except for Cho Hulk).

Honestly if they just took away Cho's powers and turned him back to normal, I'd be super excited for this book. It's actually a good cast.

Is it just me, or is the villain choice a bit underwhelming?

Yeah, he's going to be a Darkseid hype man.

@NukeA6: Yeah lol. Miller was my favorite writer before he went off his rocker.

@jonez_: You wanna see an 73 year old run around as an action hero? No thank you. Indiana Jones & The Search For Prescription Drugs.

But you wanna see a REBOOT?

LET'S JUST CAST TOM F#CKING HARDY AS MARTY MCFLY WHILE WE'RE AT IT.

OH, AND WE MIGHT AS WELL RECAST LUKE SKYWALKER AS DOLPH LUNDGREN.

The worst part is we know which side Marvel is on... :|

@jonez_: Thor is the only real god, he doesnt hide in the clouds.

But neither does Chew's Avatar... He only hides in the shadows of Gotham.

Love to see Ex Machina and It Follows in here. Your list is great, as always.

However- no Star Wars?

The only oxymoron here is your username.

No actually, if it was religiousknowledge it would be though.

Dude. How can you be that ignorant? There is proof of God EVERYWHERE. Here, I'll tell you personal story of mine that will 100% make you believe in God. Or your money back.

Alright. This happened when I was about eight years old. It was a cold, dark, windy night and I was home alone with my sister. Our parents were on a date, you see.

Anyways, around 11:45 PM, I started hearing a strange noise coming from outside the window. It almost sounded like a group of teenagers. Instantly I was terrified.

I grew up in a crime-ridden city, okay? Delinquents were a child's worst nightmare.

Anyways, I ended up dismissing it after a while. They weren't bothering me. Until- CRASSSH! They threw a bottle at our building. Terrified, surprised, and intrigued I went over to my window and looked down at the thugs.

And they looked back up at me.

"Hey! That kid saw us!" One of the smaller ones shouted out.

They began arguing amongst themselves. I, of course, had already retreated from the window and locked the apartment door. Then I hid under a blanket. I was paralyzed with fear.

And my sister just sat in her own room, by herself, with headphones in. Completely oblivious. I didn't tell her anything in fear of her telling our parents. Stupid, I know. But you have to understand that I was just a child then.

After about five minutes, I crawled back over to the window and looked outside. They were gone without a trace.

Where did they go that fast? My apartment had a view of the entire block.

I could hear them knocking on a door across the hall. They were looking for me.

Instantly, as a chain reaction, I started violently sobbing. They heard. Of course they heard. There are no breaks for an inner-city kid.

As you'd expect, they broke the door down. I was living in a horror film.

One with a red jacket and unkempt hair scared me the most. It wasn't because he had a weapon or because he was the biggest... It was because this bastard literally looked at me in the eye and smiled. He seriously smiled. At an innocent kid who was frightened and on the verge of peeing his pants.

They slowly moved towards me as a group. I weeped harder. I didn't even think about whether or not they had found my sister. I could only think of survival!

And then HE came. He lept through my window as if he were a creature of the night.

THWOP, THWOP, THWOP! He took them all out with brilliant and precise swings of his limbs. It was glorious.

And, without even looking at me, he left back through the window. Not only was I relieved... I was satisfied.

I stepped over the unconscious thugs and made my way to my room. I knew that they would find their way out. They wouldn't be terrorizing Gotham any longer

I instantly jumped onto my bed and got into the prayer position. Weeping with joy and conviction, I let the light of Chew sweep into my body and overtake me from head to toe. My God hadn't just salvaged my body from harm that night. He salvaged my soul, too.