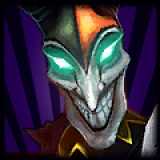 One of the first main villains in One Piece, Buggy is a "flashy" pirate captain who dresses himself as a clown, loving to plunder from villages/destroy them and hunt for treasure. He is the captain to the Buggy Pirates and former apprentice to Gol D. Roger the legendary Pirate King himself, and has become one of the Royal Seven Warlords of the Sea (aka the "Shichibukai"). Buggy has consumed a Devil Fruit called Bara Bara no Mi, and this gave him the power to split his body into pieces.

If you don't already know, here's how his power works:

The levitation effect of his Devil Fruit power allows Buggy to lift objects much heavier than he normally could, practically defying gravity. Physics are for losers.

Due to his Devil Fruit power, Buggy is completely immune to slashing/cutting/cleaving attacks, as such attacks will simply slice him into pieces without harm. Any bladed weapons are useless against him. Besides that, Buggy's overall durability is pretty high too.

A few of Buggy's off-panel feats include:

Buggy seems to prefer bladed weapons, though he most favors the use of knives. He tends to hold one single knife at a time or four between the fingers of his hands, and can perform sleight-of-hand to store/draw them whenever necessary. Buggy carries an impressive amount of these types of weapons on his person at all times; some of which are kept hidden under his gloves or in his shoes.

Buggy is a master chemist who invented these red bombs engraved with his Jolly Roger. The "Special Buggy Cannonball" can create a devastating explosion when fired from a cannon, with enough power to destroy a town.

In addition, Buggy had developed a new miniature version of the Buggy Cannonball, compacting its mighty explosive power inside a weapon tiny enough to be concealed within his body.

The "Bara Bara no Mi" Devil Fruit has allowed Buggy to perform a wide variety of special techniques using his ability to split.

And who can forget Buggy's flashiest technique ever?

This battle is a good display of Buggy's aptitude for deceiving his foes.

Notice that Buggy's fighting style is fashioned to misdirect his foes/predict their movements, allowing him to take offensive repercussions. This battle is also a good display of Buggy's reaction speed.

Buggy duels Gaimon (while in his Chibi form).

This battle is a good display of Buggy's competence in H2H combat, especially without the use of weapons.

This battle is a good display of Buggy's formidable skill in hand-to-hand melee. He can even fight without his head, feet, nor hands!

This battle is significant because Buggy stood up against one of the strongest Shikibukai without fear, and survived.

Buggy the Clown is the captain of the Buggy Pirates, a band of treasure-seeking pirates whose members resemble circus performers. Although they were initially one of the weakest crews in the world, their competence have since become tremendously stronger after Buggy recruited dozens of powerful prisoners from Impel Down, and also after forming an alliance with the Alvida Pirates.

Here are a few miscellaneous moments in One Piece wherein Buggy the Clown shows off his flashy greatness!