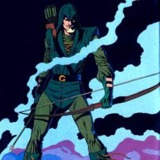 I hate comic book fans sometimes. They're the most pessimistic people EVER!!!!

I probably should've explained that. But yes to Mama Boxes.

The Grey Ghost swiftly flew above the prison rooftop in silent mode. The guards, armed with *Thermal Phasers were too occupied to notice a big grey ship hovering above them. "STONE. I want you to fire *Photon Grenades at them." Starbat demanded, unbuttoning his safety harness. Three Photon Grenades fire from the ship towards the guards, they huddle around the devices pointing their weapons at them. The grenades open up and a white beam of light flashes. "I have to thank Dr. Hoshi for that when I get the chance."

"STONE. Stay hidden. I want this to go exactly as planned. This is one of the most secure prisons in the galaxy, the wrong move can cost us big time."

The guards looked up in astonishment as Starbat descended from the ship and unto the roof. Starbat and the Kryptonian guards exchange long, intense looks. "What brings you to Krypton, Starbat?"

"Ah! So you have come to Fort Rozz to join him? How fortunate. Lord Zod would be pleased." The guard charges at Starbat with a punch, he evades his attack and elbows him in the face. He falls to the floor unconscious.

The other two guards pull out staffs from behind and they get into a fighting pose. One guard swings his staff towards Starbat, he catches it, pulls it out of his hand and hits him across the face. The last guard standing attacks Starbat from behind, he deflects it with the spikes on his gaunlet. Then kicks him in the stomach. The Kryptonian guard shrugged it off and ran towards his opponent. Starbat picked up a nearby staff and the two weapons clanged against one another. "If we were on Earth under the yellow sun, you wouldn't stand a chance. But it will not matter, you won't get very far." the guard taunted.

Starbat drop kicked the Kryptonian, stood up and aimed the staff towards his head. "Stay down!" Starbat roared. He knocked him out cold with the staff. Starbat tears off the door vent nearby and takes out a triangular device that emitted a flash of light, only this time it was slightly dimmed. The search for his friend finally began. "Alright, Ollie where are you?"

"Good god. Not you again. Can a guy rot in a Kryptonian prison in peace?" Oliver asked. A long red-haired melted the bars and walked right through. "Hell, I guess not. What do you want Volcana?"

"You know exactly what I want, Oliver. I want out of here. I heard about you escaping Iron Heights and Belle Reve. What's keeping you from escaping Queen?"

"I'm no Shilo Norman. I escaped with luck on my side. Besides, Fort Rozz is a whole different animal. You're better off using your powers to get the hell out of here....speaking of powers. Your power dampeners they......"

"You ain't the only one with luck on their side." Volcana said, winking at Oliver.

All of a sudden, everything goes dark. There were sounds of grunting and punching, followed by bodies collapsing on the floor. When the lights came on, Oliver saw a familiar face standing outside his cell. "Bruce?!"

"No time to explain. I'm getting you out of here." Starbat said.

"I don't know whether to hug you or kill you."

"We'll decide later. Let's go!" As Starbat and Oliver begin to make a run for it, quickly looking for an easy exit. They are greeted by Krypton's most fearsome emperor, Zod.

"Why so anxious to leave, my friends? It would be tragic if you left, without us getting acquainted with each other." Lord Zod said in a coldly tone.

I rushed it a little bit. Sorry, got tired of typing.

^^^Thank you for the advice. I always told myself that I needed to do stories that weren't so heavy on dialogue. Issue #2 will definitely have more action.

And I also wanted to portray Batman a little differently. The core elements will still be there, but he loves exploring the cosmos.

"Be careful with The Grey Ghost, Dick. I just had STONE do some repairing on the ship. Hold the controls steady and you should be just fine." said Starbat as he put his hand on Dick's shoulder, instilling confidence into him. "No messy landings this time." He smirked.

Dick let out a quick chuckle, not letting the little quip distract him from landing. "Well, this time. We aren't in the middle of a war between Martians and Thanagarians."

Dick landed the ship with ease. Afterwards, he hurriedly shut off all controls and operating systems. Dick was in a hurry to get back to his hometown, Blud Town. Not for the city itself, but for that special someone who was in the city. Someone he couldn't wait to get back to, the thought of that person put a huge grin on his face. Dick went outside the ship to meet with his mentor. "I quadrupled checked everything on the ship, it's all stable. STONE is offline as well."

"Great. But don't you have a date with the Comissioner's daughter tonight?" Starbat asked as he put his arm around Dick's shoulder as they walk.

"I do. But I actually wanted to speak with you about something else."

"For many years, it's been me and you in this ship fighting space pirates, cosmic entities & intergalactic warlords. I think it's about time that...

"What? No. No, of course not. I think just it's about time you assembled a crew. I'm talking about a Tactical Officer, Doctors, an Engineer."

"I have all those things covered."

Dick sighed. "That may be true. But it will do a number on you. You're only getting older, not younger. It wouldn't hurt to have a support system other than me. You have to start learning how to trust people. I have to go. But give it some thought, will you?"

"You need a ride to Blud Town? I can have a SFT here in seconds." Starbat suggested.

"It's nice out, Bruce. I'll walk." Dick replied. Dick and Starbat shook hands as they began to go their seperate ways.

"Besides. Where would I find a crew anyway?!" Starbat yelled out.

"Good question. I can't wait for you to figure that out."

Bruce was on the couch, sipping on a glass of fine wine with music playing in the background. He sat there reflecting on the advice that his partner gave him. Deep down, he knew that he was right but he just didn't know where he would find a team from. Ever since, the Waller Act has been passed many years ago. Heroes have either quit, worked for the government or operate in secret. Bruce only knew of four other heroes, but none of them would be interested in exploring the cosmos.

The sound of the door knocking startled Bruce. He stood there wondering who could be knocking at this time. His Butler and his daughter were off planet, so it couldn't have been any of them. But SFT makes anything possible. Bruce gets up and opens the door. He's greeted with an unfamilar face.

"Good evening, Mister Wayne. My name is Maxwell Lord, I am the the head of ARGUS." He said coldly.

"I'm just going to cut to the chase. I've been searching for a mystical artifact for years and I finally know where it's at. But even for me, it's out of my jurisdiction to just round my men and retrieve it."

"I have no idea what you are talking about. Have a good night." Bruce said. As he was about to shut the door, Maxwell Lord put his foot in front of the door.

"Oh right. Of course you don't. The Helmet of Fate is on Apokolips. If you knew anything about that helmet, you'd know that it's one of the most powerful objects ever. And it's in the hands of the most powerful warlords the universe has ever seen. Before you turn me down, I understand that you are not registered. This place is surrounded by ARGUS troops. I can take you in if I wanted. What would your daughter Helena think about that, Starbat?"

Bruce frowned, balling up his fists. He walks up to Maxwell Lord and looks directly in his eyes. "Don't you ever bring up my daughter ever again. If you ever touch her, I will....

"It's not very bright to threaten a government official." Lord said with a grin.

Lord smiles. "Take Dick's advice. Assemble a team. You can start by breaking your good friend out of Fort Rozz. Hopefully, Oliver Queen has learned his lesson this time."

NEXT: Why is Oliver Queen in a prison on Krypton?

I liked what Johns has been doing with Cyborg, even though there is more that can be done with him. Hitch and Walker has been doing right by him. The haters just make me like the character more.

This is easily the best Daredevil I read in a while. I absolutely LOVE when my street level heroes are street level. No cartoony gimmicks or anything. I'm glad Elektra is coming back into the fold, but I wonder if Soule has any plans for the classic rogues.

I'm not going to sit here and whine about crossovers. If I find them entertaining, then I'll keep buying. I enjoyed Truth & Savage Dawn is off to a great start.