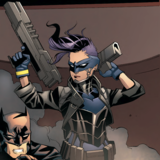 This has been a series that I have been looking forward to since I first heard about it, as having a huge interest in any form of mythology as well as having enjoyed Merlin (being slightly upset about it ending) I was really hoping for something just as good to replace it.

Whilst looking for the remains of his fathers sub, Jason is in a peculiar incident and wakes up in Atlantis.

This was a brilliant opening episode for this new series, and although it was slightly different than I expected it would be, it was still amazing. The episode was very entertaining, having some very humorous moments, whilst also showing the mythological side brilliantly, even if not entirely accurate. I also enjoyed the unique tone that this series has, as although it was something quite different than I originally expected, it was a very nice surprise. I also loved the character interaction in this episode, as it was very lively and entertaining, adding a lot of drama and excitement to the episode. I did however feel that the episode was slightly slow at times, as well as the fact that certain scenes went too quickly, but overall this was a very enjoyable episode and I look forward to seeing more of this series.

With this being the opening episode it was natural that the cast members be introduced, so I thought that I'd take a small amount of time to talk about them here. All three main cast members did a fantastic job, as I really enjoyed Jack Donnelly portrayal of Jason, Robert Emms portrayal of Pythagoras and Mark Addy portrayal of Hercules, as although these may annoy some die hard mythologists I personally loved this different view point on these legends, though if it wasn't Mark Addy as Hercules I'd probably be very upset about this change. The other cast members such as Aiysha Hart as Ariadne, Juliet Stevenson as the Oracle, Sarah Parish as Pasiphaë, and Alexander Siddig as King Minos were also very good, as although some were obviously better than others, they all played their characters well, as although some were slightly inaccurate, their characteristics were brilliantly shown.

I really enjoyed the unique way that this series would start, as having the main protagonist travel to Atlantis from the present was a very interesting way to start the series. I also really enjoyed the change in tone that would happen between Jason's travel, as both felt very unique,adding to the atmosphere. I also really enjoyed how Jason reacted once he realised he was in Atlantis, and even more so given the fact that he knows all the legends and myths behind the city and the people who live there. I also loved actually seeing Atlantis, as although I always expected them to do a great job of showing this place, it was even nicer to see it, and the characters walking through it.

The two characters that Jason meets early on are Pythagoras and his roommate Hercules. Now when I first saw these two characters I thought to myself that they've really went for drama and entertainment over accuracy, but after watching the episode develop I felt that it was actually a very good thing for the series as it made it more unique and entertaining. I also loved how both these characters interacted with each other, as although Jason's reaction and interaction with both the characters was very interesting, given the fact that these characters have known each other longer, their interactions felt more natural and entertaining, and instantly showed that these were old friends. I also enjoyed the fact that the episode laughs about Hercules' changes from a strong muscular character to a fat one, as it made the change much more tolerable and appealing.

The main developing point of this episode would be the fact that it's time for Atlantis to sacrifice seven of it's people to the Minotaur to honour Poseidon. This was a very interesting development for the episode, and would result in some very exciting and entertaining scenes. It was however the Minotaur itself that I was most impressed with, as it looked amazing, and I enjoyed the look of this Minotaur over the ones that have been shown in recent mythological films. I did however feel that the fight between Jason and the Minotaur could have lasted slightly longer, but overall the tone in the scene was perfect, and it was a great way of adding something exciting in the opening episode.

This episode would also introduce the ruling family of Atlantis, with King Minos, his wife Pasiphaë, and their daughter Ariadne all being featured. I was very happy that these characters were involved in this episode, as the prospect of what these characters might get involved in later on in the series really intrigues me, especially given the reputation of their legends. I also loved how the episode clearly showed the differences in each characters characteristics, showing a caring Ariadne, a calm and collected King Minos, and a devoted, passionate, and loyal Pasiphaë. The interaction between these characters also really interested me, and overall I look forward to seeing their development throughout the series.

This was a very exciting and interesting opening episode and it has me really excited for the next episode. The episode itself was also very exciting, and at times very hilarious, having a brilliant tone. It is also a very unique series having very interesting and entertaining characters. It may however not be for everyone, and people who hate inaccuracies in mythological adaptations may not like it. I would however highly recommend watching this, and especially if you enjoyed BBC's Merlin or Robin Hood series'.