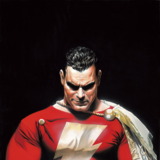 Rain on My Parade

"This is Joey Beckham, Superhero, what can I do you for?" He smiled as he said the words, as every day the Olympian seemed to come into the limelight more and more with each act of heroics. Indeed, this was the prime of his career, the real pinnacle of success, the cat's pajamas, the bees knees, the... "Wait, what'd you say?" Joey Beckham stopped, eyes growing wide as he began to register what he just heard.

"She just passed, man. They're cremating her in the morni-

He dropped the phone, and the sonic boom that was made from him taking to the skies sent the civilians flying back from where Joey had once stood. The skies were torn apart as he zoomed past, and in less than a second, he was there, shattering the window to the hospital, with Tom sitting in a room across from a series of nurses carrying away a hospital bed with a cloth over the body. Before anybody could see him, he summoned a bolt of lightning, which struck him and transformed him back into his teenage self.

"Wait!" He called out, but by then, the nurses were gone. Joey's eyes welled with tears, and he turned to Tom, who shook his head.

"I don't know, man, last night, she was fine..." Tom scratched the back of his neck, not sure how to handle the situation. Pamela Holt wasn't his mother... In fact, he was just told to check up on her every few weeks, to call Joey if things went bad. A way to repay the boy-god for saving Tom's cat. Now, Joseph Beckham ran down the hall, pursuing the nurses and calling after them. They didn't listen.

They hardly turned around. They pushed past some large double doors, and from there, medical staff stepped in front of Joey, telling him something about how he wasn't allowed back there. "You don't understand, that's my mom!" He yelled, attempting to push past them. But now, he wasn't a titan, strong and lean. He was a boy, wracked with emotions and tears painting his face as they trailed down his cheeks. "Mom!" He yelled, giving another big surge. But he was mortal, and weak.

Now, Joey and Tom sat in front of the hospital, silent, except for Joey's weeping. Tom turned to him, eyes deep with concern. The older man didn't know Joey very well. Just the fact that he was a kid playing hero. But hopefully, that'd be enough to comfort him. He opened his mouth to speak, to give some words of solace, when Joey interrupted.

"Where're they taking her?" He sniffled, hugging his knees with his head buried deep in his hoodie.

Tom blinked once, before responding. "The morgue. Then, the crematory."

"She didn't wanna be cremated."

"Gothic's cemeteries's full. Nowhere else to put her." Tom looked down, tears welling up in his own eyes now. "They'll send the ashes to-"

Before Tom could finish, a bolt of lightning hit, and Joey was gone. The boy-god zoomed through the hospital, collected the body, and left, all within a blink of the eye. Zooming off into the skies above, Joey's mind raced. What am I going to do?! There's gotta be something... Mutants? There's gotta be a mutant somewhere, or some spell, or some...

She didn't want to be cremated. That was the first concern. But Joey didn't want her to die, period. And in his world, there had to be enough extraordinary talents to resurrect her.

He continued thinking, his brain coming up with new ideas every microsecond. Glancing down at his cold mother, Joey started crying again as he flew off to find answers. Embracing her closely, one final thought came to mind, as the Gothic rain began to fall.

I'm getting you back, Mom.

This might be crap writing, not sure, but Joey's got a new motivation.

Thick lips chuckled into a microphone, as the lead singer of the popular thrash metal band, Kyanide, walked out onto the stage.The rest of the band followed, spotlights illuminating each one, as interns scurried around backstage to make sure they hadn't unplugged the equipment too early. Kyanide's fans screeched loudly in response to the question, and jumped up and down, already starting to form new mosh pits. The lead singer's eyes darted from the members of his crew to the audience, before reaching into the pocket of his gross denim jacket, feeling the hard stone that had been placed there earlier.

"Alright, then..." He smirked, the lights going up with a burst of pyrotechnics and fancy lasers as a guitar was tossed into the direction of the lead singer. He caught it, expertly, and drew the stone at the same time. A deep blue crystal throbbed with energy, and he raised it overhead, a sharpened corner of the crystal forming a perfect guitar pick. Kyanide now jammed headfirst into one of their hit songs, the rest of the crew oblivious as to what the crystal was.

But the lead knew. The crystal throbbed, and a light crystalline barrier formed around him. The members of the band were worried, but continued playing, and the audience merely ate it up, as another stage trick. But when the smoke machines came out, the crystalline barrier broke away, and a new man rose from the smoke, lightning striking his guitar as he proceeded to play one of the greatest guitar solos of all time.

The former singer now commanded the air to raise him up into the air, as he now hovered above the entire stage. That's when the problems arose. Fingers flying across the frets, he commanded the lightning to strike down at the mosh pits below- widespread death and destruction raging throughout the concert. "I'M THE GOD OF ROCK!" He screamed in excitement, as the crowd below screamed in fear. They ran, but still, the lightning pursued them, and the solo continued.

But not for long.

Amidst all the lightning, a new bolt was formed- one heading straight for the new God of Lightning.This bolt stopped immediately before colliding into the singer, and as soon as it did, it became recognizable as a humanoid figure, clad in red, gold, and white. The solo ceased, as well, as the Olympian's hands were currently clutching the singer's head. "Nope."

With that being said, the Destroyer of Worlds pulled his hands away from each other, the sickening crunch of the man's neck snapping resembling thunder to the people below. The body fell to the floor below, and the storm ceased. The crowd had stopped, as the danger ceased, and the Heir responsible for saving them slowly glided down to the stage. Golden shoes landing delicately, he turned to the microphone, nervous grin showing perfectly whitened teeth.

NO, MY REPUTATION WILL NOT BE SULLIED BY SUCH BEHAVIOR-

"Aw, can it, Z. It'll be fun!" He whispered to himself, before grabbing the guitar from off of the ground.

Then, lightning crackled down, and Joey Beckham proceeded to play the greatest guitar solo of all time.