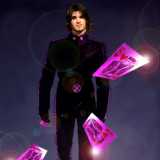 That isn't what white privilege is but in some cases it can be that.

A white felon has the same chances of getting a job as a black man with a college degree.

I never understood the point of the series other than to make white people in the US feel bad...

I mean, the slaves that were taken to the Americas would have been slaves anyways if they remained in Africa. Also, South America took a larger percentage of African slaves than North America did. If you are going to make a movie about the slavery of Africans, that's fine, but I always thought they should at least explore every aspect of it instead of a small percentage that went to the US.

And the movie is about one man's heritage. It wasn't made for white people.

Will finish this month.

So Magneto can move plastic also?

There's no correlation between crime rates and incarceration.

When crime rates increased in the 80s, incarceration increased.

@paragonnate: You should read How the Irish Became White.

The GI Bill/New Deal/Homestead Act are the 3 examples of white privilege. Those 3 acts of legislation birthed the white middle class.

Poor whites have privilege also. It's called having better employment opportunities, having more wealth (not income) than poor-middle class blacks, not being targeted by the War on Drugs, and less likely to live in neighborhoods of concentrated poverty.

White privilege refers to any advantage, opportunity, benefit, head start, or general protection from negative societal mistreatment, which persons deemed white will typically enjoy, but which others will generally not enjoy. These benefits can be material (such as greater opportunity in the labor market, or greater net worth, due to a history in which whites had the ability to accumulate wealth to a greater extent than persons of color), social (such as presumptions of competence, creditworthiness, law-abidingness, intelligence, etc.) or psychological (such as not having to worry about triggering negative stereotypes, rarely having to feel out of place, not having to worry about racial profiling, etc.).

Operationally, white privilege is simply the flipside of discrimination against people of color. The concept is rooted in the common-sense observation that there can be no down without an up, so that if people of color are the targets of discrimination, in housing, employment, the justice system, or elsewhere, then whites, by definition, are being elevated above those persons of color. Whites are receiving a benefit, vis-a-vis those persons of color: more opportunity because those persons of color are receiving less. Although I believe all persons are harmed in the long run by racism and racial inequity — and thus, white privilege comes at an immense social cost — it still exists as a daily reality throughout the social, political and economic structure of the United States.

The fact that white privilege exists and that all whites have access to various aspects of it, does not, however, mean that all whites are wealthy, or that in competitions for jobs and other opportunities, whites will always win. The fact of general advantage doesn’t require unanimity of outcomes favoring whites. In certain situations, other factors will effect the distribution of opportunities: among these, socioeconomic status, sex, gender, sexual orientation, religious identity, age, or physical disability. There are, after all, also such things as class privilege, male privilege, straight privilege, Christian privilege, and able-bodied privilege. And these other forms of privilege exist — and generally provide greater opportunity to their respective group members — even though there are rich people who lead miserable lives despite their money, and there are men, heterosexuals, Christians, and able bodied folks who are poor. On balance, it pays to be a member of any of those dominant groups. And the same is true with whiteness.