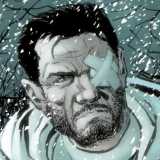 Yeah - that's what happened to me. As a kid, I was, as most of us, into comics. Probably, when I was even younger, I wanted to be a superhero - i'm just assuming so, 'cause i don't recall myself ever truly hoping to be Hell Kitchen's guardian or poster-boy for american patriotism. Anyways, comics and stuff based on them was my thing as a kid. After that came crazy teenage years, when hot girl next door or ''homeboys'' with bottle of cognac became priorities. Maybe even before that. Comics just disappeared from my life like that - well, you know how things come and go in life... For the record, i'm still young, but i clearly have more priorities in life than i had than. Ex., I have a son now. So, one day i was thinking how things were better in my childhood for kids than they are now for my and other offsprings as far entertainment goes - that made me check for some comic issues I really loved back in the day. I see u, SOPA... Back on the topic - i'm a very big, lets say, sympathizer of mafiosi inspired movies, books, etc. I even could tell you loose history of every family in The Commission. So, that's how we get to the story of how I returned to the world of comics.

Driven by nostalgia and my need to read something criminal underworld related, I picked up some Daredevil, Spider-Man and Punisher titles. They say that hunger grows while eating - well, that's true, because I learned about the (than) current criminal underworld ruler The Hood. I loved the idea about having underrated villains coming together. The idea of villains in charge and heroes as underdogs always seemed appealing for me, so it's only right I loved the Dark Reign arc - even with all the flaws and errors it had. Meanwhile, I also was catching up to older issues of characters I was interested in - more or less, spending my free time reading comics. So, basically, with a blink of eye, after more than a decade, I was pulled back into comics.

Or maybe it was characters like Wilson Fisk and Frank Castle, who put the foundation, when i was a kid, for my interest about organized crime in the first place?! Who knows, who knows...

So what was the thing that made you come back to or never leave comics? Did they kick off some kind of ground for your real life interests too? Feel free to share!