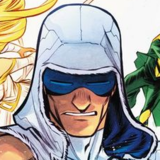 Why an open-world Flash game can work!

Lots of fans nowadays seem to think openworld games seem to be the way to go for most superheroes out there, and why shouldnt they? Most superheroes and antiheroes protect and/or operate in an entire city. This is the case with Flash as well, no matter who's under the mask (Jay Garrick, Barry Allen or Wally West), they all protect the twin cities, Central City and Keystone City. However, Flash gets rarely mentioned in this discussions, with many people wondering if Flash really could be adapted into a video game. Well, I'm here to prove that yes, he can! And it would be an awesome game!

First things first, the most important part of any game. How could Flash's speed work in his hypothetical game? Moving around shouldn't be much of a problem, it's been done before:

Seems pretty straightforward (heh), right? You're fast, very fast, but not so much that you can't control your speed and know what's going on. Of course, you'd be able to tap in and out of superspeed mode so you could comfortably interact with NPCs and such.

Next is combat; when fighting bad guys you have your typical combat layout (punching, grabbing/throwing, etc). Since Flash should notice when someone's about to attack him you could have a similar combat system to the one from the Arkham games (which seems to be pretty popular nowadays), but that's where the similarities end. When approaching a enemies the game should give you the chance of blitzing at least one punch on an unsuspecting enemy (that could grant you an instant KO, similar to that move in the Arkham games where Batman glides into an enemy, grabs him and slams him into the ground). With that said, there would be button combinations to take advantage of your superior speed. For example, a move that allows you to deliver one punch to all enemies in superspeed, a small tornado that could lift them from the ground or take their oxygen away, attack with small whirlwinds generated by your spinning at superspeed, punch someone many times very fast, etc. At the beginning of the game you would have certain basic abilities but as you gain experience you would get new abilities such as vibrating through solid objects, freeze time for a short period of time (or as I like to call it super-superspeed) or the aforementioned combat moves. Just because you're Flash doesn't mean you have to be that fast.

Of course there's the question of which Flash should star in this game. I personally wouldn't mind any of the choices (although I would obviously prefer Barry) but based on WB and DC's recent track record I'd say it's a pretty safe bet they'll be going with Barry Allen. I personally would prefer a Pre-52 setting where we get to interact with the other Flashes (Jay, Wally, Bart Allen as Kid Flash) and the Flashes' allies and supporting cast (Iris, Joan, Linda and the kids, maybe even Jesse Quick and Max Mercury). An special option that allows you to use other speedsters would be quite awesome.

A basic story for the game should be easy to make, especially if you're hoping for at least one sequel. The villains should be the Rogues, who would have very cool boss battles: Captain Cold would use his cold gun/powers and release several hazards to even things out in his favor such as creating a cold field to slow Flash down, freezing the ground to make you slip, the classic cold beams of course; Heat Wave would use similar but much more destructive tactics since his fire won't just go away forcing you to end the fight fast (pun intended) and he'd burn everything around him, destroying the area; Weather Wizard would use his wand to create all kinds of disasters through the city and you'd have to avoid them and keep pursuing him; Mirror Master would use fake versions of himself to fool you, create mirror duplicates of yourself to attack you, trap you in mirrors, etc; Trickster would use his gadgets to attack you and avoid you and his flying shoes to avoid you as well, forcing you to come up with creative ways of handling him. There's other great and dangerous Flash foes of course, such as Abra Kadabra, Top, Dr. Alchemy, Gorilla Grodd and the Reverse Flash but you could save them for other games. You could also use more minor Flash foes like Grinder, Tar Pit, Cicada, Murmur, Double Down, etc. for side misions.

Both Central City and Keystone City would work (as long as they use the correct Flash of course) and it would be awesome if you could be in both (current technology could make this possible). Other places that would be cool to see, depending on which characters are in the game would be: The Flash Museum, Gorilla City, Iron Heights, and many others.

This one's easy, as there's many cool stuff they could include in the game, such as other costumes, bios of different characters, maybe even unlockable characters and extra challenges or free digital comics.

So, have I convinced you? Would you give The Flash a chance if it was made (and it looked awesome of course)? Voice off below and let me know what you think, and if you have any new ideas present them as well of course!