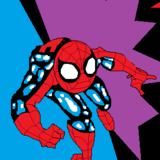 Some studies on light and shading done with MS Paint, any critiques or opinions?

Well the title says it all this is the official place for the discussion of everything action comics since Greg Pak started his run.

What artist from any company would you like to see put on for each Valiant title?

DO YOU WANT JAE LEE TO DRAW SHADOWMAN

The title says it.

I for one think he is a perfect match for it.

Sorry for the misleading title.

Now, what I want to talk about is how red hood has had an art shift, the art itself isn't that good but it always has beautiful covers so why can't one JUST ONE of these be the main artists, thank you.

VALIANT'S UNITY IS A TEAM

Valiant unity is a team! What do you people feel about this as it is not an event, especially you @k4tzm4n. Please can u create a team page for them @k4tzm4n

If you were to have a Valiant animated movie, what comic would it be, who would voice the characters and what kind of art will it have?

HERE'S TO HOPING VISION GETS A BETTER BODY

SHHRRIPP! goes an androids body or a robot supposedly made of a strong metal; Vision and Red tornado are especially prone to this but Iron man rarely gets scratched except in the movies were he is not yet indestructible in his armour. But please can vision get an almost indestructible body. As "Avengers AI" comes out it grants me the wish of getting vision a better costume how about also a better body also for red tornado because that guy is pretty much crushed by a car. Thanks, please comment.

I love Nicola Scott's art but I don't know why for some reason she just doesn't seem like a fit for earth 2, I know people think different and i'm sorry but I think she is better fitted for a title like World's Finest or Catwoman(when Palmiotti starts writing WF) and to the main point; the artist's I think should take the reins:

This guy is talented and I think he can handle Earth 2 better his art is not everyone's cup of tea(black hawks reviews) but it is very nice and I easily see him giving Alan Scott more constructs. His covers are outstanding and Yildiray Cinar is just not doing it good on Earth 2.

This guy is talented and he could also do some work in Earth 2 as you can see an Earth 2 issue he did above with other DC work. He has detail like David Finch without making it dark and he uses only pencils.

He is the top New 52 designer, he is a fantastic artist and even helped develop Earth 2 designs and I know some people still want Nicola but c'mon.

"He is more suited for a dark title"I know some may say that but he has done lighter work so he can suit it perfectly.

@matchesmalone21, @CitizenBane, @k4tzm4n, @inferiorego, @Babs, @wbrock1955, @CrimsonCake, @xerox_kitty, @Vance Astro: I love earth 2, the way Robinson crafts his tales is nice but I don't like the way he writes flash's powers; he seems so slow and I know they might say development is coming but that should be for other things like vortex, vibration of molecules and so on. What about his natural speed, we easily see New 52 flash running all the way from central city to metropolis in a matter of seconds and I saw a battle forum where they compared n52 flash to jay and they said he showed no substantial speed feats whatsoever. I will say he was running around the world but still that took him time, the latest issue of earth 2 atom almost catches up with jay now I know you might say he is big and Jay was carrying people but he got to DC fast again not said how fast he went with Kendra so I love Earth 2 but i need more for Jay Garrick, thanks. :)

P.S: Green Lantern should also be able make constructs and should have a battery so he can carry the earth energy with him to space because green lanterns are known primarily for being for space.