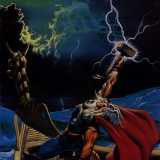 Why would this completely subjective system of strength ranking warrant a page all its own? It's pretty clear this is based on the arbitrary judgment of a few fans. There are clear and in some cases flagrant inconsistencies, and this certainly doesn't reflect Marvels official ranking system. For instance there have been dozens of direct comparisons between Hercules and Thor and exactly zero indication that Hercules is of a higher strength level. And how did they in certain cases determine the difference between characters who can lift 100 vs 125 tons? You might as well have a wiki page of the hierarchy of "the best characters." It would be as official or objective.

Just curious. I'm trying to find a way to browse or search through user lists, but can't find the option.

Well, with all due respect, what you've just said seems compatible with what I've said, so I'm not sure why you begin with "No,." I said that the majority of the your commentary was an argument concerning why Thor should have lost this one, which it was. The fact that it was in the middle seems immaterial, because the middle you're referring to--an argument about why you think Thor would lose--takes up easily more than 50% (if not more than 75%) of your total textual contribution to the article. Which... I believe qualifies as "most." :) [Not including whatever other appreciated labor you may have contributed.]

And, I didn't say it was anything but what "you think." What else would you be arguing but your own opinion? I just thought it was a bit weird, because usually the winner of the poll gets a bit more due. Which seems appropriate given this is probably what motivated a least some percentage of people who participated in the first place. As such, it seems like it was in bad form--but I acknowledge there may have been reasons that you chose to approach things as you did. Regardless, if you didn't specifically catch the beginning where you announce the poll results, based on the focus of your article here you might think Faora won the bout. I've read the other articles, and you don't generally deliver such a long rebuttal against the poll results. I also notice that in most of the fights, you do a cool little collage cut out where the winner is presented standing victorious over the loser, but in this case you didn't do that. Which is a bummer for a Thor fan I think, especially one who was a big fan of that little touch.

Also, to be fair, it wasn't a rhetorical question; I was legitimately curious why you would match these two up if you thought the fight wasn't close. If you thought it was a close fight in the first place, I apologize for not catching that, but it wasn't particularly clear in your article. In fact it seemed quite the contrary, the few potential victories you do ascribe to Thor, you attribute more to Faora's bad attitude and not Thor's power or ability. And, while subtle, but by no means escaping notice, what you picked to be the best Thor pro-argument, while interesting, was mostly florid, and even it ascribed the victory in major part to Faora's over confidence, and features Thor requiring aid. On the otherhand, the pro-Faora argument, while for the most part I think was padded and uneven, was presented in a much more analytic fashion.

Consequently, I think my question was a fair one. So... I'll ask it again: if you didn't think it was a close fight, why would you match these two up in the first place. Okay, just joking, I know you probably still maintain in was a close fight, even if this was perhaps disguised by the content of your article. Also you have more than a few informal-logical problems in your argument--you know, the one that was in the middle :)--which are mostly different versions of what's usually called special pleading. But alas, it's too late too correct them, you've already spoken. :)

So Thor won the vote by a decent margin, but you spent most of your commentary explaining why that shouldn't have happened. If you thought the result should have been so obviously in Fiora's favor, that it required you to take an exceptional amount to explain why Thor shouldn't have won, why would you pit the two against each other in the first place?

#5  Edited By JeredMcCorkle
yeah, my vote is for Nomad.  And, give him an original suit.  Nomad's another alter-ego Steve went with and Nomad's been a long standing Captain America supporting character so it seems like a natural fit.  I think Bucky Barnes has become a develooped enough character to make for a good USAgent, but--and maybe it's just me--but I'm actually a fan of John Walker.  I think his militant, jingoistic, hard-headed attitude makes him a real jerk, and a character that really stands out.  I hope to see his return as USAgent.  And, given that the Nomad identity isn't occupied right now, Bucky being Nomad would mean it wouldn't have to be either Barnes OR Walker.  Two great character active  in the Marvel Universe is better than one, in my opinion.
11 years ago

#6  Edited By JeredMcCorkle
Someone's already mention this, but I find it odd that the most mysterious character on the hype poster is Dracula and nothing was said about him at all.  I can't believe they asked about Spider-Ham before Dracula.
11 years ago

#7  Edited By JeredMcCorkle
That first Jason Todd and the Scarlet Spider are pretty damn spot on.  And cyclops on the cell phone and Mario and Luigi are pretty funny.
11 years ago

#8  Edited By JeredMcCorkle
I can't wait for Galactus to come to Asgard!  And, I trust Fraction as a writer enough to know it'll be in good hands.  Incidentally, until I watched this video, I had no idea just hwo many Thor related pies Fractions had his fingers  in.
11 years ago

#9  Edited By JeredMcCorkle
My vote for best Robin goes to Tim Drake.  I think he's the character who's best followed in the Bat's footsteps.  Dick's a great character, but he definitely his own man with his own trajectory, and I love what they've done with Jason Todd in turning him into the Red Hood.  But, Tim; as far as I'm concerned, he's been groomed to be the next Batman.
11 years ago

#10  Edited By JeredMcCorkle
@The Mighty Thor:

Well, classically Thor (like the Hulk, Hercules, and the other Marvel top tiers) is rate as 100+, which means in excess of 100 tons.  Most of Thor's lifting feats are well over this this though.  If we have to translate it to tons, I'll say Thor can lift at least 365,000 tons.  That's the approximate weight of the Empire State Building, and I think Thor could lift that if he needed too.
11 years ago