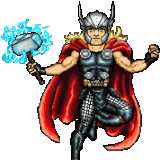 @jeanroygrant: Uh, he said Teen Goku, So no supersaiyan yet.

Otherwise, a difficult win for team 1.

Aizen can solo, Alucard can solo, Yusuke can beat anyone on team 2 besides Goku... were my first thoughts. But, there just isn't that much info on what a fully powered Father can do. So, could go either way.

-Akhenatens blast hit him with the blunt force and King Thor and Zeus survived it .(All the other Skyfathers there died, that is a reason i put Odin, Zeus, King Thor over other Pantheon Skyfathers).

Actually, iirc, they survived by escaping the blast cause Zeus saw it comming and opened a portal to escap, they didn't survive by tanking the hit, it would have killed them too, hence why they made a quick exit, that's the only reason they survived, cause Zeus saw it comming and was quick enough to make an exit while he pulled Thor through with him!

Yeah, your right. I check again,

All I can say is Avengers Assemble issue #4, Hulk does Thor in one blow with his own hammer, silly Thor.

But guys..this is a massive stomp in Shocker's favor. I mean he is one of the most powerful villians in Marvel...

LOLOLOLOL..ah..man..I couldn't type that with a straight face. Anyway, does X-23 have anything that would protect us against effects of Mysterio's gas? If he can disorient her, Shocker can drop her. Failing that..they're screwed.

@AtPhantom: Gaia is also the weakest Eldar God. ever heard of the Vishanti? Those Multi Versal beings of Magic that allow Classic Strange to beat beings like Dormammu who punked Eternity?

Oshtur is sister of Gaea and gave birth to Agammoto who is himself a Eldar God.

Thats 2of the 3 Vishanti which are Multiversal Beings and responsible for more than half of Classic Strange power backing.

Then we have Chthon who is the defacto creator of all Dark Magic! Chthon alone stomps Odin, Zeus and the rest Hell Lords in Dark Magic and knoweldge.

Then we have Set who fed off so many Eldar Gods he became pretty much unstoppable and had to be defeated by Atum who was design to beat Set.

Gaea ONLY feat and power was creating Atum. She never enlighten herself like Oshtur was with Horggoth. She never created all Dark Magic like Chthon. She never took additional Eldar God power like Set.

Gaea was the weakest Eldar God by far out of the 6.

So no comparison can be made at all with Gaea.

Gaea gave Hercules Multiversal powers in Chaos War. So, yes. She is on there level. She is just not one, known to fight like the others. As for the match. Elder Gods stomp.

Are people forgetting how powerful Goku is?