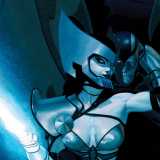 I'd stick with Ellen Page. I think she's a perfect fit for the character, she just needs to be giving a far better role is all.

Maria Hill taking over the Coulson role (being in different MCU movies in a small role), and with Joss' creative input with The Winter Soldier being inevitable, I really hope we get to see some set up for Hill's dislike for capes and her taking over as Director of S.H.I.E.L.D.

REALLY loved X-Force, and hate to see it end-esp.since it doesn't NEED to.

But that's what makes the ending so important. End it before people get fed up with it or before it runs stale. Uncanny X-Force has been, in my opinion, the best comic book series in years by either Marvel or DC. It makes sense to end it on a high note.

Plus, these two new X-Forces sound awesome! Very on-the-run in a post AvX world when the Avengers are hogging all the limelight. I actually am warming to the idea of some X-Men being classed as 'villains'.

Hmm, while it might turn out good, it does sound a little too much like concept of the original Teen Titans (as in a younger version of an older team)...and that only became really good once it moved away from that idea.

But like I said, it might be good (just annoying the AA kids have either vanished or stuffed in a meatgrinder :S)

Young Avengers has been around for years though, and has proved that the characters are far more than younger versions of The Avengers.

This is the best news that Marvel Now! has to offer.

I liked the bathing suit. :( She looks like she belongs in the golden age now.

See, that's what I love so much about it. It looks instantly classic; the costume she should have always worn. The black Warbird outfit with the lightning bolt was bold and powerful as a female costume, but this one looks more like an iconic superhero outfit. I see the teaser for A+X and am awed by Captain Marvel's inclusion rather than, "another chick in a bathing suit".

The Ms. Marvel costume that Moonstone used was Lovely.

That was Carol's original costume, and even that would have been greatly preferred to what she's wearing now. At least the current sales trend is a good sign:

Issues 1 and 2 were similarly disparate. Hopefully Marvel eventually recognizes that Ms. Marvel in her iconic black and gold costume was what the majority of Carol's fans wanted.

That's such a simple question.

One Development from Avengers vs. X-Men:

Cyclops was right and Captain America is a hypocritical dump turnip.

I'm just waiting for the "Killers" teaser to be a relaunched core X-Force, with Psylocke in command.