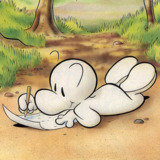 Birdman Movie Is A Rip-Off

Since the movie Birdman won the Oscars I was wondering people's thoughts on the elephant in the rooms regarding Hanna-Barbera. When we cartoon lovers see the title we think Birdman and when we see the outfit we think Blue Falcon. Regardless on how good you think the movie is do people on here believe it maybe actually be an artsy way to rip-off the company? Last I knew the movie makes no mention that the name or outfit oddly resemble Hanna-Barbera trademarks.

So this might be old news but is anyone else really bothered that Dr. Octopus and Spider-Man switched roles completely? I hope it's only temporary because this Dr. Octopus isn't even one of my favorite Marvel villains.

After reading Alan Moore's The League of Extraordinary Gentlemen Century: 2009; I was thinking there should be her own spin-off series. She's such a mysterious character in the series yet has a huge role in this particular comic book. What are some other people's thoughts on the topic?

If you had to choose which version you like best which would it be? The American team, Power Rangers, or the Japanese team, Super Sentai?

What makes a good character?

To me a good character has to have a name that stands out and a good background.