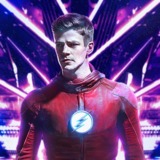 I felt the wind. And I kept running.

All the once green lands of the earth were no more than ash and charcoal. The air was heavy with the smell of burnt flesh and smoke hung in a haze that partially obscured the blood-red sun. The cities stood like skeletons, barren wastelands, empty now that disease had taken whatever the battle did not. Even the oceans stood still like semi-stagnant pools of death and decay, there were no waves as even the wind had left the earth and no Atlantean strong enough to stand against the harsh world of the surface. The skies were barren, no birds flew or sang, And all the while the oppressive heat rained down like the breath of hell.

But in this state of decay there were still survivers, and one walked across the streets of the once Platinum Railroad of Science: Key City, the once glistening city so vibrant and full of life; smoldered with the heat of the sun and looked of death and hopelessness. The lone walker of the home of innovation shuffled along in a daze reflecting on how things could have gone so wrong. He trudged through empty alleys and through burning buildings as his feet bled and teeth of despair bit at his brain. Once a great hero he was nothing more than a shell of a man, his mind gone and his heart destroyed, he was LESS than a shell of a man.

He was a monster.

And there is nothing sadder than a monster with good intentions.

Jai Walker's empty eyes floated to a restaurant that stood strong, albeit slightly collapsed and the speedsters' eyes glistened as he recognized the establishment.

Dave's Diner, the place his parents met, where they fell in love, they used to take Jai here all the time as he was growing up. The smell of the fries temporarily expunged the scent of burning flesh from his nostrils and memories began playing through his mind, everything that had led up to this post-apocalyptic disaster Jai now resided in.

He remembered trying to rid himself of the disease plaguing his body by harnessing the Speed Force to levels never seen before hoping that it would overpower his disability and eradicate it.

He remembered the plan working through and while disfigured he was now cured and able to use the full extent of his power. Ascending further than almost any speedster has ever gone.

He remembered finding one of his fathers' old prototype suits and perfecting it.

And he remembered doing unspeakable acts in the face of trying to stop the Crisis that was approaching.

He had peered through the timeline finding critical points in the unfixed stream of time and worked to prevent them. Beginning to grow desperate in his attempts to save the world the hero began to descend into madness, arguing and even trading blows with his father to be.

Nothing he had done worked, no alterations, changes or deaths succeeded. Sleepless nights focused on the lives he had taken haunted him for he never wanted to do it. But as the months past by him he never stopped hoping and fighting to stop the Crisis.

But then it came and the world descended into madness, Jai and a legion of heroes stood on the front lines and witnessed as their worst nightmares came into view, versions of themselves armed with power they couldn't comprehend...

And they turned the world into a cesspit of destruction.

Now in a world destroyed and broken Jai walks the streets alone reflecting on the mistakes he had made and wondering what the world would have been like if he wasn't in it?