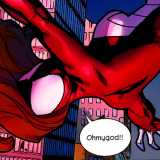 The rain can't wash this spider out! 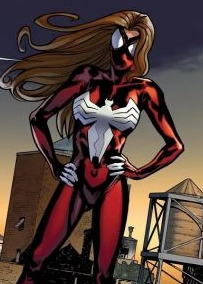 Occupation: Former Yale University student, Majored in Toxicology with studies of Toxicogenomics and Medical Toxicology. Currently working at a research facility in Expendiville.

Species: Human with alternation via mutant blood and spider venom

Due to plagiarizing issues if you need any history information regarding Itsy please feel free to PM me on my main account. All power listings will still be on bio for RPing references.

Erin Bolton is a brilliant, yet obsessed, student of Toxicology at Yale University. Growing up she had always been fascinated with chemicals and the effects of them on living things. By the age of ten she had created her own version of a chemistry set, gathering chemicals from around the household and testing them on plants around her home. Growing up she was an honor’s student who participated in track, winning state medals for her school and kept a 4.0 GPA. While she was popular due to her academic and athletic abilities, she didn’t have any real friends and mostly kept to herself, staying away from parties or social gatherings.

After graduating high school, Erin instantly enrolled in Yale University and began working towards her Toxicology Major. She soars with flying colors in her studies and spends most of her times in the student laboratory, constructing her own studies on the effects of certain poisons on mutant blood. Her studies showed that mutants in general were more resistant to poisons and harmful chemicals in general due to their altered DNA and RNA structures.

One day Erin was experimenting with the blood of a young mutant who’s powers were adapting and mimicry abilities. She wanted to know if the poison of the Redback Spider, would either destroy the cells of the mutant blood, or if the blood would adapt to the poison. The results were amazing, the blood actually took the DNA from the venom and reconstructed itself to developing similar qualities as the spiders DNA. This was an amazing finding, this meant of this mutant of these abilities were bitten by a Redback, it was possible that they would develop spider like abilities!

While she was excitingly recording her abilities, she accidentally pricked herself with a needle that was filled with the venom. Not having any anti-venom, and while in a panic state, Erin took an entire vile of plasma from the same mutant and injected herself with it, hoping that the mutant genes would be able to counter the effects of the poison, at least until she got to the hospital. But before she could leave… her heart began racing inside her chest as a heavy pressure was felt against it. Breathing accelerated and she could feel a pins and needle tingling all over her body as she became diaphoretic. Her world… went black.

Upon waking up her nerves felt like they were super sensitive, she could feel every vibration that was being walked outside the room, she felt like her head was still spinning as she stood up, but realized… she was still alive. Amazed that she even woke up, she reached to grab her notebook, only to have a white silk like thread shoot out from her fingers. Her eyes widen in fear as she bit her tongue to prevent herself from screaming. Stumbling back she accidentally knocked over a vile of blood, but before it could it the floor, she automatically snatched it in mid-air. What had happened to her? Did the blood do more than just suppress the poison of the spider? Did it… give HER spider like abilities?

No longer a student but now with a Masters in Toxicology the 28 year old now works at a research facility in Expendiville and also works as one of the few heroes that actually roam around the city trying to stop crimes.

Bio-Shock: Erin can use her own body’s natural electricity (from her nervous system) to shock enemies and paralyze them for a few minutes. However, because this uses Erin's own natural electricity, she usually becomes disoriented for about a minute after using it, so she tends to avoid the use.

Itsy Sense: Itsy is able to sense any dangers/threats that are coming her way. She develops a tingling sensation to the back of her neck that runs down her spine.

Enhanced Balance: Her powers have allowed her to develop perfect balance. This allows her to keep the center of her balance at all times. She can perfectly on almost any object and thanks to her ability to stick to any surface, it doesn't matter how small, narrow, unstable the surface is. She can stand on it. If she falls or trips it's because's trying to keep up appearances while in her secret identity.

Enhanced Durability: Itsy is able to take a physical beating much more than the average person before the attacks actually start taking a tole on her. She is however NOT invulnerable. Blades, bullets and harsh elements can still cause harm to Itsy. But thanks to her own bio electric abilities, electricity tends to not effect her as much.

Enhanced Agility: Because of her powers she is now able to move around effortlessly to be able to doge attacks with ease, swing with her webs and direct herself, do acrobatic moves in mid-air and other gymnastic feats with little effort.

Enhanced Reflexes: This allows Erinto easily to dodge bullets, dodge in mid-air, and maneuver around complex attacks, catch falling objects effortlessly and react instantaneously to what others take more time to react to.

Enhanced Jump: Able to jump incredible distances and land safely. As of now, Erin is able to jump up to 100.

Enhanced Speed: Itsy is able to move and run faster than the normal human. This (along with her other abilities) allows Erin to catch criminals faster than they can run and even go on foot on some car chases if she is unable to use her webbing to keep up. She can reach up to 60-70 mph.

Enhanced Strength: The limit of Erin’s strength hasn’t been found yet, but it is assumed that like the average spider, she is able to lift 170x her own weight. So technically, Erin should be able to lift 21,250 pounds.

Nocturnal/Insomnia: Erin used to love sleep, when she was just a normal girl without crazy spider powers. Because of the DNA of Redback spider now infused into her, she actually becomes rather sleepy during the day and is mostly active at night. She is also physically stronger at night than the day. However, she cannot sleep for more than four hours at a time. She can't figure out why... but she hates it.

Slow metabolism: Her body processes energy much slower than before, much like the Redback, she is able to live without food and water for long periods of time. The longest she had gone without eating or drinking anything was an entire week before she developed a light appetite.

Wallcrawling: Molly is able to climb up walls of any surface unaided.

Latrotoxin distribution: Able to dispense latrotoxin venom via incisors that appear just above the upper canine teeth. She calls them her 'vampire teeth'. These teeth come out when Erin is pushed to a corner and are shown as a last resort to try. First to intimidate the attacker and then to bite them and inject her venom into them.

Pheromone Secretion: Itsy is able to secrete powerful pheromones that either induce fear or love. She is unable to control which pheromone will be produced or when (sometimes even just being just a tiny bit anxious will trigger it), making this a very unpredictable and unreliable power that usually causes more problems than actual help.

Web Generation: Users can create silk, web like thread from her fingers. This is an organic webbing that is produced through glands in her forearms. If those empty there are glands in her bilateral axillary. The web has a tensile strength that five times as strong as the same weight of steel.

Web Gliding: Like newly hatched spiders, Erin is able to use her webs to travel long distances if she is stranded in the middle of no where by using a process called “ballooning”. A special kind of silk called “gossamer” is used that easily catches on the wind and forms into a triangular parachute that can allow Molly to be airborne for several hours at a time.