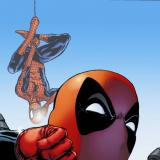 The fight of the century

Deadpool The Merc With A Mouth