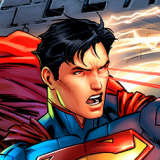 What Makes Green Lantern Great: A comparison with Lord of the Rings, Batman, CAPTAIN MARVEL, and Superman

Green Lantern is one of the top 4 most popular heroes in DC, so, if you read DC comic books, odds are you've read at least one or two of a book with the words 'Green Lantern' on the cover. The origin for every Green Lantern Corpsman is usually discussed in each issue or at least alluded to. For those of you who don't know it goes like this: Fearless adrenaline junkie, Hal Jordan, suddenly has the most powerful weapon in the galaxy, the Green Lantern's ring, forced upon him. He goes to the home planet of the Green Lantern Corps, Oa, and finds out that he is a member of an exclusive force of super space cops.

And then he saves everything multiple times. This story of having an uncontrollable situation thrust upon a man is pretty well known to comic literature. Superman doesn't know he's alien until he realized bench pressing tractors is an abnormal activity for 12 year old farmer boys. Batman is just a normal spoiled kid until he sees his parents shot down in front of him. Captain Marvel is nothing more than a really solid kid called Billy until he meets the Wizard Shazam. Bilbo is just a Baggins until HE TOO meets a wizard!

But let's not forget realms outside of literature. We too have uncontrollable circumstances fall on us. The difference is this: Green Lantern is the one guy who not only had some really cool powers and adventures thrust upon him, he was required to be actively responsible as well. Superman could've just stayed a farmer. Batman could've been a normal person and gone through some therapy rather than becoming the worlds finest ninja. Billy Batson could've been Batman. Bilbo could've stayed in his hole! The difference between Green Lantern and those other guys is they didn't really have a choice and because his power chose him in spite of him.

Superman and Billy Batson are upstanding guys that you wouldn't mind letting take your sister, mother, or girlfriend out on a date. Batman is impressionable (he is around crazy and goes crazy). Green Lantern is kind of a loser, but can conquer his own fears. That's what makes him a winner. Because he doesn't really have a choice. I mean...he does. But does he?