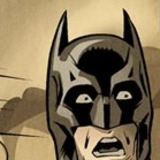 @iro: Literally everything you said, I agree with you, he really needs a better identity.

Also I completely forgot about bart, cass & kon, wish I didn't remember haha, but Kon, feels like he did him even worse in way, because for a time, he wrote every comic in which he was in, even Superman during times when he was in it. Literally the only time Superboy was a good comic, was once it stopped being writen by lobdel as well as affected by his teen titans or superman stories. Which was basically just the last few issues.

I'm hoping that they give him a bird themed identity, but we'll see. ^_^

and yeah, kon is... almost beyond saving at this point, which pains me to say. someone dedicated enough could probably try to salvage him, but it'd take a lot of work and I'm not sure dc's all that interested in bringing him back right now anyway, since they have jon who's busy carving out his own little space in the superman books. I mean, I'd argue that building a proper superfamily would do the support cast some good, but it might be a while before editorial feels the same way.

buuut! there is the possibility that others are trapped alongside tim, since we saw other cells where he's trapped, and those might contain characters dc feels they need to do damage control with. so maybe, kon and the rest of the 90's crew can get a chance to make their return.

@iro: @2cool4fun: Tim is "dead" from what everyone is lead to believe. And no that's Bronze Tiger, skilled martial artist and at times an assassin, though usually portrayed as a hero.

ah yeah. I know people in the dcu think tim's dead, for now, but the way the character has fallen in popularity among both the writing staff and the fans for the last few years, can't be explained by pointing at his recent "death", especially since everyone knows he isn't actually dead. if anything, him dying is just a symptom of how apathetic most of the fans are to him now so they've apparentlly decided to take him out of the picture for now (literally in some cases, like how he's missing on that variant cover above, depicting batman with all his sons, which isn't the first time he's left out in group shots) and seemingly he's not gonna be brought back and freed from his current captivity 'till dc decides what to do with him.

but I have hope that they'll do a revamp and get him back to his roots a lil' bit, since they deemed it fit to make him a part of the greater rebirth mystery, as opposed to just letting him fade even more in to the background in some team ongoing.

huh, I hadn't heard about bronze tiger before, so thanks for informing me!

@iro: Yeah I feel you, the New 52 realy stripped down everything that made him the most loved Robin, and the only robin to have a solo title, and just made him pretty generic, truly lobdel's finest work.

Also, I didn't even notice that was Bronze Tiger, kinda excited to see him play a major role.

lobdel is almost single handedly responsible for running tim, cassie, kon and bart into the ground as characters, although other stuff didn't help either. it's quite amazing just how much damage that dude can do tho.

as for tim specifically, he's been feeling pretty redundant for a while now, since damian stepped up as robin, while dick and jason fill the roles of the older "sidekicks" with their own unique identities, who run around gotham. meanwhile, tim have basically just replaced barbara, as the (less interesting) tech wiz of the batfamily. all his personality seems to have gone down the drain as well, to be replaced with an arrogant, unlikable cardboard cutout. add all that to the changes to his origin and you've got yourself a big mess.

so yeah. lots to fix there. I personally think he needs a new identity stat and for his origin to be retconned back to the way it was again, and then the writers might have more to work with. but who knows what will happen. either way it's all pretty depressing.

character assassinations all around! man, bendis truly is the master at completely running characters, concepts and all kinds of stories completely into the ground. amazing!

and the best part is, that if galactus came and decided to just slurp up MU right now and they all subsequently died, I would not care in the slightest. reboot away I say, only, you'd probably manage to mess that up too right?

if only tony could have truly died at the end of this event, instead of leaving some A.I. version of himself behind, then I'd at least rest easy in knowing that bendis wouldn't be able to continue to write him horrendously, while retconning his history even more. but of course I couldn't get even that...