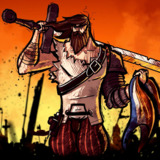 I figured I'd post this down here to set down some ground rules without ruining the thread: The only feats from the FF1 GAME I'm posting are the fights not depicted in a novel, because the novel (being translated and directly published by Square Enix) is naturally, canon.

I also won't be using concept art or "optional" boss fights from any of the FF games: Atomos, Gilgamesh, Chronodia, etc.

I also won't be using appearances where the Warrior isn't 100% confirmed to have defeated an enemy, for example, Shade Impulse can be completed with any character, so there's no "canon" hero in that section of Dissidia.

I'm leaving out stuff from Record Keeper, Brave Exvius, World of Final Fantasy, ALL of the Theatrhythm games, Final Fantasy XIV and quite possibly, even Opera Omnia.

No one? This is a good thread, Myth.

@wollfmyth209: Its your respect thread I guess. A generic accolade is still a solid accolade.

In "Evil Never Dies: The Sith Dynasty", Adas is said to be good in H2H combat.

@wollfmyth209: Not exactly a fair comparison, seeing as it isn't him in the flesh.

@nickosaurusrex: Mine too! The PSP version lets you play as him.