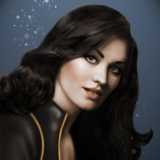 Limitation is designed to be shattered

Infinite Serum: Using a combination of studies and experiments on numerous mutants and metahumans the Black Cell corporation devised a remarkable amplifier of ones capabilities. While the Black Cell high ups thought as a almost heretical action the results were spectacular and made Taylor what she is today.

Do to the Infinity Serum it is believed and speculated that Taylor may have infinite reflexes. Able to perceive things and react at any speed. Her strength and speed are at average peek levels however many often fail to notice do to how fast she can react. This is further hard to distinguish because Taylor has infinite throwing strength. Far outclassing most in this field for her a pencil thrown could be more like a rocket. Infinite site, the ability to look at any distance at presumably any spectrum in any medium. This allows for everything from seeing in the dark, to x-ray vision, no matter the range. Infinite hearing, the ability to perceive sound on any level to any degree, believed to be able to use even faint vibrations in her body to hear even in places like space. Infinite smell, allowing her to smell and track presumably anyone and anything. Infinite stamina the ability to never tire, through this she also has a infinite lung capacity as well. This also provides infinite immunities allowing Taylor to never get sick poisoned drunk etc. Infinite taste a ability to detect every flavor texture and more by taste, not only is she immune to things like toxins but with this ability she is able to identify when someone tries. Infinite mind, able to think plan strategize almost anything at any given rate at any moment. This makes her a genius unlike any other though she usually doesn’t use this for scientific purposes. Infinite supply the power to generate things like energy, ammo etc when touching something. Because of this she can seemingly drive without stopping for gas, to firing guns for a infinite amount of time and more. It also grants Infinite balance leading to a unique talent in acrobatic motion. Infinite knowledge, a distinct ability to retain all the knowledge acquired and learn with sublime ease.

Last of this power is infinite perception the ability to know predict and see things on a whole other level. This ability is the grandest of Taylor’s. With this upon contact with something she becomes infinitely aware. She knows its history perhaps even its future and knows exactly how to use it at any time at any state. Through this she also has a remarkable understanding not just of say the building she is in, but what is going on in the building. This combined with her mind and acrobatic prowess make her a tactician and escape artist hard to surpass. And ultimately results in a almost precognitive soldier.

Gear: diamond dagger in plastic arm cartridge inserted like that of a cybernetic component. In short it supplies Infinity with a constant amount of knives at her disposal. Infinity pistols a gun that rotates barrel for a faster fire rate like that of say a gatling gun. However to function like this the pistols need a lot of additional components and can fit only one bullet in the magazine. This is countered of course by it being altered with Taylor’s genetic code. In short it never runs out of ammo despite appearances, Taylor keeps two of these. Infinity also has a pair of glasses with her at all times that work to provide all visionary needs. They also allow her to hack into any computer at or below government grade. Last is the suit worn, which provides comfort in any climate and protects against small arms fire.

Weakness: It’s instinctive not controlled, in short it is far from perfect. She’s still human with human durability and her reflexes are easy to trick. The body tries to adapt, so the ideal solution is to beet the adaption time. Firing say bullets, and then firing a faster projectile. In short her body would be ready to dodge the gunfire but would not be ready for the heavier attack.