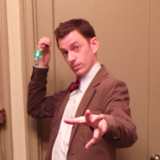 Eye Spy begins with a group of men all wearing matching suits and red masks and all carrying steel briefcases boarding a train. A woman observes them and follows. This was a nice set-up. I feel like we, as an audience, are more likely to be suspicious of the men in red masks. They definitely set off my inner “If you see something, say something.” But as it turns out, it was the lone, silent woman who we should have been on the look out for. Well played, SHIELD screenwriters.I do question the san...

The second episode of Marvel's Agents of SHIELD aired last night. During the preview at the end of the first episode, we were teased with the phrase "Oh-eight-four." In last night's episode, we found out what an 0-8-4 is. It's the code for an object of unidentified origin. The last 0-8-4 Coulson dealt with was Thor's hammer in the dessert. This 0-8-4 takes the team out of the country to a South American jungle.The episode began excitedly, with a gaping hole in the SHIELD plane's hull mid-flight....

I woke up early like a kid on Christmas morning and rushed to my iPad to buy Justice League #23. After putting out my Outsider/Alfred post, the suspense of waiting to have my suspicions confirmed was killing me. I had the feeling we'd be getting answers this issue and did we!Ivan Reis, Joe Prado and Rod Reis knock the art in this issue out of the park. I think this is best I've ever seen out of this art team. Every panel on every page is expertly rendered. If there's any complaint about the art ...

The GoodI was a big fan of both Runaways and Avengers Academy, so it was nice to have the characters from both those series share the spotlight completely in this issue.When we first see Reptil, Hazmat and X-23, they are searching for Juston and his attacker. Another character is attacked under mysterious circumstances, leading to a rift in the short lived alliance between them and Nico and Chase from Runaways. At this point, it's unclear whether or not the mysterious attacks are being done by o...

Faithful Adaptation of One of Batman's Best Stories 0

The Dark Knight Returns: Part Two by impossibilly on January 31, 2013