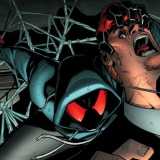 I'm a nerd who likes to play bad-ass.  As a nerd, however, I'm not keen on the whole "getting severely injured" thing.  As such, I dig Nerf's line of "safe" combat equipment (especially those damn swords).

As such, I was positively giddy when I saw THIS.

Yep, Nerf's making a Nerf Mjolnir, alongside some pretty cool looking Asgardian swords.  So, now you too can feel "wield the power of Thor" without risk to (much) bodily harm.  Hell, I picture picking this thing up and just hurling it straight at my little brother's big melon.

Okay, maybe I won't be doing that, but still.  Am I the only one who finds this to be uber-cool?