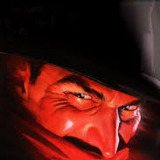 Look, after what we saw Superman do in Justice League this is no longer a debate, it's a troll thread.

@christianrapper: Really? I don't know many normal people walking around with radar and super senses. Maybe you live on Earth-Two.

@matthew1061: "No, Shadow is not described as having the strength of ten men, at least not in any of the pulps I have read."

Bats has beaten Bane with Venom. Take the Venom away and blindfold him? He doesn't have a prayer.

Savage's brain and Shadow's psychic powers are enough to take this. Also Savage and Shadow have teamed up many times so they have a prior rapport to draw on. Shadow is described in the Street & Smith pulps as having the strength of ten men so he would be the most powerful of the four. Savage is a master of various forms of martial arts so he would be deadly in close quarters. I don't see a path to victory for Tarzan and Conan.

No one. As regards DD, having heightened senses and radar is a form of superpowers, no?

@healed1337: No other human can understand droid you say? Poe understood BB-8 pretty well, and Luke seemed to understand R2 fine in The Empire Strikes Back on Dagobah.

I don't remember Poe understanding anything BB8 said. I saw it over a month ago so I could be wrong but I don't think so. And Luke didn't understand R2 at any point in the OT. Any communication between the two took place through C3PO or the display computer in Luke's X-Wing.

Crack shot? You mean how she missed at least half of her shots, compared to the not force sensitive Han Solo shooting a stormtrooper's head without even looking, or Finn nailing almost every shot even though most stormtroopers are terrible shots?

You should watch it again. This part I do remember because of its sheer ridiculousness. She missed her first shot and then from 50 meters away tagged three Stormtroopers in a row running at right-angles from her position.

Han Solo didn't have much of a choice with a co-pilot when Chewie got injured, and he was clearly annoyed by Rey jumping into the seat at first.

Han then offers her a job an hour after wanting to boot her out onto some habitable planet. Han famously doesn't trust or need anybody except Chewie, but our Rey just naturally brings out his softer side I guess. One of the reasons people have accused her of being a Mary Sue, established figures in the Star Wars universe act completely out of character around her.

Rey didn't find BB-8 - BB-8 was found by an alien not far from Rey's ATAT home and she heard him/her panic (the creators haven't really given BB-8 a gender as far as I know).

When I said she found the MacGuffin I meant Luke. IMO he was the real MacGuffin. The map was just the means to get there.

That 10 minutes of screen time is around half a day in-universe, after those same force powers are used on her first. As a survivor she would need to adapt to things fast, and that can logically extend to learning the force when she's forced to. Since we don't know her full backstory yet, it's too early to assume she's not re-learning them from her time as a child at the Jedi Temple, whether she realizes it or not. Additionally, there are strong hints that she has some sort of connection to Luke Skywalker, whether by blood or not.

In the grand schema there's not much difference between ten minutes and half a day when we're talking about learning a skill that took others years to master. Even if she had training as a child, she hasn't exercised that muscle in a decade or more. It should be atrophied, not emergent. I could maybe be sold on the fact that she blocked Ren's mind probes, but to turn it back on him and probe his? Sorry, nah.

As for Leia bypassing Chewie, well ... that could be one of the movie's weak points with writing.

On that we agree.

The expert mechanic and combat skills are a product of growing up on a rough planet. It's either you gain those skills or you die, and they're both things that force sensitive people tend to be good at anyway.

When my car breaks down, I don't take it to a junkyard owner, I take it to a mechanic. Just because you know how to strip a part, doesn't mean you know how to put it in or how it's used or what it's for. Combat skills I'll give you. In fact I could buy any two or three skills she has, just not eight. It's unrealistic and with each successive skill she's automatically levels up on it takes you further out of the movie because you're thinking, "Rey's at it again."

The piloting is explained both in a line in the movie ("I've flown ships before, just not off planet"), and in the book Before the Awakening, where it's explained that she has a working flight simulator in her ATAT home (other data discs she found taught her detailed ship schematics and droid speak).

When the Air Force trains pilots they use simulators sure. But they don't transition pilots directly from those simulators to a $50million F22. I don't care how much simulation she's done, she outflies two First Order Tie pilots in a ship that she believes is a piece of junk that hasn't been flown in decades. Another eye rolling moment.

I would argue that she's ultimately no more impressive than Luke Skywalker in A New Hope if you go by the start of each movie. He's the better pilot (death star battle), the better shot, and clearly has better social skills due to not being an intentional loner, even if he lived a bit of a sheltered life.

I don't agree that he's a better pilot. The trench run was cake compared to the stuff Rey pulled in the wreckage of that Star Destroyer. A better shot I'll give you. But she's a better fighter, speaks who knows how many languages, clearly outclasses him in mechanical knowledge, and as far as the social skills thing, Luke was a whiny, b**chy brat whom no one liked except Ben and the droids. Everyone loves Rey. Han, Chewie, Finn, Leia, Maz, BB8, they all become instantly smitten with her. She's the most cardboard character we've ever gotten. And yes, I'm including the Prequels.

How well lit is this warehouse? The extent of my knowledge about Winter Soldier comes from the movie but if we're using the Street & Smith version of the Shadow written by Walter Gibson he has the strength of ten men, the famous power to "cloud mens' minds," a powerful hypnotist, displays some formidable judo and boxing ability, and is an expert marksman. I think the Shadow should be able to disturb WS's aim through psychic means and shield his location long enough to get a kill shot in. The Shadow takes it.

Kent Allard. Seriously though, I can't see Blade losing this. Blade can see in the dark right? That mitigates one of the Shadow's greatest assets. I guess the outcome depends upon how resistant Blade is to psychic powers.