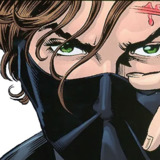 Turn your face away from your god. Nothing can save you from me.

Maybe it's time I focus on my villains

Now, I know those making the most noise don't represent the entire fandom, but it's hard to believe that their hating Matt this much. If he didn't do what he did, then they'd be cursing him for giving them a pass. It happened. It was in character. It's just the nature of the game plus bad dice rolls. Fandoms can be toxic.

@lowlaville:(hope it's ok I jump in)

Looking through a pair of binoculars, her cold eyes kept an eye on the men that were several buildings over. She was hired to make sure no heroes disrupted them in their heist, that was all. Just a overpaid glorified babysitter. This was going to be the easiest job she ever pulled off... and the most boring. But a contract was a contract, and her greed would never turn away a job. These men though, they were so unprofessional. It would have been easier for them to have just given the job to her, it would have been done already.

It was going to be a quiet night, or at least that's what the once assassin thought, until her eyes caught the ever so slight movement in the shadows. Not in the direct area of them, but close enough for her to know someone... or something was lingering. To an untrained eye, it would have just looked like a shift of light, possibly from the traffic below. But to Homicide, she knew, and it made her lips curl into a snarking grin. Pulling the binoculars away she stretched her neck and shoulders and in a blink of an eye, she was gone. She appeared right before the men, who cried out in surprise, some even dropping their supplies in the process.

"WHAT THE HELL MAN!?" One of them yelled out. "What are you doing here?! You're gonna blow our cover!" He was yelling at her, which didn't even phase the trained killer. Instead her eyes were focused on the creature she spotted several rooftops over.

She leaned forward, in a aggressive motion, almost animalistic. Her mask still covering her face from the bridge of her nose down, but her eyes spoke of that of a predator. Throwing her arms slightly behind her, the metallic bracers that were on her forearm, unleashed blades from them. Her weapon of choice, her Vernichtung Klingen, a weapon passed down from generation to generation. She took an assertive stance, ready to attack the moment the creature who lingered in the distant shadows decided to come out and play, and oh, she hoped she did.