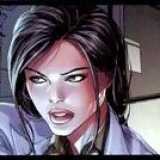 Does anyone know why he is called Jericho exactly and why he dresses like a pirate? I don't get it. Is it a reference to something?

Raven is too big for a spin-off or a team. She needs her own ongoing series.

Well...to be fair we never know how much is real in reality tv these days.

#4  Edited By Holly Cross
"Holly, she's heading toward's Baker street make a sharp right and you can head her off" Walt's voice boomed into her helmet

"Got it!" Holly responded doing just that

She made a sharp turn and stopped abruptly before the main road. She killed the engine and waited. Her heart thudded against her rib cage. The anticipation was agony. She sat waiting for a giant wolf to come her way and take that 1 in a 14 million chance she'll hit her dead on and the tranq will take effect immediately. A great gray blur errupted through the bushes and Holly fired blindly. A small whine made her open her eyes to see a large wolf shake her head as if to clear her view. It turned it's large head to glare at Holly before slumping into unconciousness.

"Walt!, Ghost! Leah's ready for pick up over at Baker street"
10 years ago

"Tell me, Ghost! Do you think the populace would be able to handle a werewolf better than us? Or do you just have it in for her and wish she'd get shot"

She turned away and marched to her room, suiting up. She slung a rifle loaded with tranqs over her shoulder and filled her holsters. Walt! She screamed over the banister to the the team alien.

He emerged groaning, his hand clamped to his side. "You think this time you can catch Leah without letting go?"

"Then suit up!" Holly barked

"That goes double for you, puppy" she said in Ghost's direction using the nickname she gave all newbies

She walked over to the basement door and walked downstairs.

The vast space of the basement connected to a a side of their garage that secretly opened into their drieway, allowing Holly to take her motorcyle and kick the engine into roaring after Leah.

Together with Walt, Holly dragged the unconscious wolf up the stairs. She kept a careful grip on Leah’s head making sure to wrap her arms around the snout, in case the wolf girl woke up and decided Holly’s arm would make a neat chew toy. Walt had the harder time, carrying the large wolf’s body which weighed ten times as much as human Leah.

Holly could feel the sweat collect within her fat suit and as soon as they lay Leah down on the kitchen floor she ripped off the suit till she wore only a tank top and mini shorts she always wore under. Walt grimaced in disgust at the suit lay on the floor like used human skin.

“C’mon, Walt. Let’s get her to the living room” Holly sighed wiping her brow with her forearm.

She reached out but stop short, then fell backwards to avoid the large wolf snout that snapped at the air where her head had been seconds ago.

The Leah wolf was awake and with her wounds she clearly was scared and hurt, relying now on her base instincts. Walt wrapped his arms around Leah’s middle, giving time for Holly to scramble away. Leah, turned to snap at Walt but his alien flexibility kept his limbs and head out of her reach.

Holly made a mad dash out the kitchen to get her rifle. The clanking of pots behind her warned her of the struggle that Walt may not keep up. He had super smarts and super flexibility but the boy wasn’t super strong, he could only keep Leah at bay for so long. She skidded to a halt in the hall to see, the new student, Crysta and Magick staring surprised at each other.

“Ursa, Teresa! Uhm...our dog has rabies...get out guest out of here, now! Please!” She called

She heard Walt give a loud yelp and turned to see Leah scrambling out into the hall. Her eyes were blood shot and dog drool dripped from her lips that were pulled back into a snarl.

Holly was on her way to the ladies room when she heard wailing and snickers coming from the boys' room. Without any inhibitions she pushed her way in to find three large adolescents crammed in a stall. One apparently appeared to have gotten his hand stuck in the toilet (how the heck did that happen?) while the other two were trying to free him and at the same time keep from collapsing with laughter (nice friends).

"Gentlemen, what seems to be the problem?" she asked.

Moe look up from the stall to see a guidance counsler smiling pleasantly down at the three of them.

"Though you could pass for a dude you big fatty"

Holly blinked in surprise at hi insolence before she realized she had read his mind accidentally. She let the comment slide, it was just the suit after all...wasn't it? No time for simpering female insecurities. She made her way towards them to peer into the stall where Beau Maxted's hand was wedged, it took her a minute to see the problem and solve it.

"Are you making a fist?"

Beau relaxed his hand and it slipped out with a gurgle.

"Ohhhhhhh" he and his friends replied in unison. Holly rolled her eyes.

"Mr. Maxted what were you doing with your hand in the toilet, did you lose something?"

Beau started to whimper and rubb at his eyes with his damp sleeve making Holly grimace.

"Are you referring to Mr. Archer?"

"Yes, mam. He shoved my hand in the toilet"

"The same Mr. Archer that is probably half your size?"

"The same Mr. Archer who is also my cousin"

"I see. Please all get to class, you're missing it"

The three large boys scrambled out.

"Don't ever call me a fatty" she smiled her eyes blazing. Moe paled and bolted.

Holly checked her lipstick in a mirror and walked about to see the three boys frozen in place.

" I thought I told you three to..." she stopped realizing they were frozen like ice sculptures. She ran down the fall puffing from the weight of her fat suit. She paused at the sight before her. Xane Umbridge was holding up Crysta while shards of broken glass lay at their feet. Magick looked worried and Walt looked lost.

"How--" then through the silence the sounds of Glee's "Don't stop believing" cut through the hall.

"Mr. Umbridge it appears you're making quite an umpression on your first day. It appears that there is a gas leak and if you seem to be seeing some strange activity make your way to the nurse's office and have her treat you. I must talk to my sisters and my er...cousin. Family matter, please understand"

Xane shrugged and made his way towards the nurse's office that Holly pointed too. Her sweet smile melted when face with the two magic users and the alien.

"The three of you are suspended for the rest of the afternoon. Collect your things and meet me in the parking lot in 10 minutes"

"I didn't do anything!" Walt protested

"Doesn't matter just go. Leah needs us back at the house"

Olivia Hunter leaned back to observe the shifty-eyed teen before her, "Do you know why you're here, Daniel?" the boy blinked at her behind thick lenses.

She gave a soft chuckle that took years of her face. "Not so much, no, Daniel but it appears your grades have slipped a little, can you tell me why that is?"

Daniel Cassidy was Ayn Academy's brightest students with a record of perfect A's since the 1st grade but his beautiful A's were dipping into B-s which is scientist parents were greatly worried about.

"Well, you're in no immediate danger, the school year's just beginning. I'm sure you can get your grades up by mid-terms"

She struggled to get up from her desk chair to escort him to the door.  Before she left she whispered in his ear, "Don't worry about Lauren Mitchell, Mr. Cassidy she'll come around but flowers would be a nice suprise tomorrow morning on her desk, wouldn't they?"

She gave him a small wave and shut the door before he could finish his question. The boy was in love with the new girl and nothing could be more distracting that cupid's arrow. Anyone could have noticed but Cassidy was remarkably good at hiding his feelings but it didn't matter how good he was he still couldn't hide it from an empath.

Holly Cross, fanned a hand over her face. The fat suit she wore kept her warm and toasty but it wasn't exactly a soft cashmere sweater. As Olivia Hunter, the chubby motherly guidance counselor of Ayn Academy she kept her identity beautifully. She had tried coloring her hair but the more observant superheroes and villains could still see through her disguise. Nobody would suspect the roly-poly  counselor to be the lithe, athletic assassin, Holly Cross.

"Annabelle, will you be so kind as to send the next student in?" she said into the intercom
"Sure, Olivia" a high pitched reply came.

Ursa Hunter stomped her way into the office, her combat boots were caked with dirt and her strawberry blond hair stuck out in all directions. She slammed the door shut behind her and stood straight before crumpling into a ball filled with laughter. Holly rolled her eyes as Magick laughed. Ever since Holly donned the fat suit the team had been relentless at teasing her. Magick wiped the tears of mirth from her eyes and slumped across the chair before Holly's desk.

Holly scribbled on some paper. "Angela Morgan got an interesting suprise in her locker this morning" Holly said without looking up. Magick snickered in response. Holly's pen stopped abruptly and she stared at Magick over the rim of her none prescription glasses.

"What were you thinking, Magick?" Holly asked her, her silver eyes glistening.
"She totally deserved it Holly! I swear! She's been going around saying How Crysta have different fathers and are mom was probably a total slu-"
"Magick! We do have different fathers! We have different mothers! we're not really sisters! It's just a cover!" Holly exclaimed
stamping her high heeled shoe on the linolium.

"Well, I know that and you know that but Morgan doesn't and she had no right to call my fictional mother a slu-"
Holly glared
"floozy" Magick finished

"You made it rain tadpoles in her locker"
"Yeah, well I was going for frogs but I hadn't mastered the spell yet"
"You couldn't have just emptied a bucket of chili on her head?"

Magick blinked at Holly, "Wow, that was so lame"
"It's suppose to be lame. You're suppose to be a boring average teen"
"It's not me Holly! I mean you know I'm all about the shazam!"
"Tone it down, Magick or SHIELD will be all over us in a flash"
"Yeah, I know"
"Good. Now get to class"
Magick rolled her eyes.

"And tell Teresa to stop throwing out my peanut butter"
"Who?"
"Crysta? You have to remember your code names we can't risk it"
"Right, later big sis"

OCC: Sorry Magick and Crysta if you don't like your names but if you pay attention all our civilian names are going to spell Outsiders. Olivia, Ursa, Teresa...you can always change your names if you like.

*Sighs* I never said there should be a Supergirl movie I just said if there was I think Diana Agron would be perfect for the role, coz in my head that's how I imagine Kara Zor-El would look like.
11 years ago

#10  Edited By Holly Cross
@Slight:
Unfortunately it wasn't true to the costumes they themselves desgined :(
11 years ago