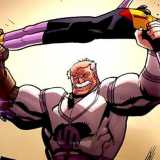 I'm sure I don't have to tell most of you guys, but man, is writing hard.  It was always a dream of mine to become a writer.  I always believed I had the imagination for it.  I could think of all these clever little ideas.  The problem always came about when I actually tried to put pen to paper.  All of those clever ideas seemed to fade away.  I would then sit there staring at a blank piece of paper for hours on end until I just gave up.  I go through these cycles over and over and now after all these years I'm ready to throw in the towel.  It's still something I'll love and it will always be close to my heart, but the days of living in the clouds is over.

Easily Deadpool, but he might be too much of a strech to be considered a villian.  Thanos could carry his own animated movie.