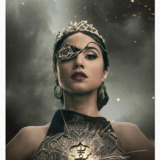 The Wages of Sin

The Wages of Sin

After quite some time away, the High Queen returned to the Court of Courts with Shayla in tow. There was a sense of dread creeping through the holy chambers of the library, though none of the librarians would dare say aloud, their Queen was no longer impartial.

The Prime Ninjan Queen walk stride for stride with the Immortal Judge before finally breaking the silence that distanced them. "I can't believe you manage to get the Madison to turn on her people. That's cold, I don't think I ever stooped that low"

Ishara shot Shayla a curious brow before halting in the middle of the hallway. "You have. TWICE to be exact." Ishara released another sigh in agitation, before finally revealing what was on her mind. "I'm annoyed. This shouldn't be possible, but I'm annoyed at the fact you still haven't found my book. I know enough about you, more than you think. ZICCARRA.

The blonde's eyes wince at the mentioning of her real name, but when matched with the all mighty High Queen she could do nothing and like it. "I know you're stalling hoping for some sort of final gambit, and I respect it. But I'll stop all those thoughts here and now."

A quick waft of the hand-pulled a door from thin air, Ishara invited Sha in first before following closely behind with her hands behind her back. "Alexis Pettis had an interesting theory about you before you "killed him," he thought you to be redeemable for some unholy reason. He's not an irrational person so I humored the idea, and he was right.

The two of them stopped at a coffin positioned in the middle of the room, Ishara's fingers gently trace the surface before continuing her arrogant speech. "You know why universe traveling is such a sin? because you never know what the consequences will be. I'm sure you remember there being TWO of you. Of course, you do. Your father tried to create his world, messed up his calculations and accidentally birth a "pocket universe" You decided to choose exile and came to Earth, your counter-part stayed and suffered the punishment. But of course, you know this. I was trying to figure out why you only retained the horrible memories of your past, but then it hit me like a Sonic Burst"

Another waft of her hands caused the casket to swing inside rest the second edition. Much-like Catalina to Ziccarra in this universe, identical in every way with the exception of their specific upbringings. " You kidnapped this woman, stashed her away and begin pouring your undesired feelings into her. Your "shade" as Maya Liafador called it. Now, here's the deal" Ishara's hand moved again, but this time the two were in the throne room with the High Queen on her throne.

She appeared calm, her voice was low but forceful and threatening. "You will go out there and find my gahdamn book, and if you don't, I'm going to wake her and join you both back together. Powerful yes, you are; but you're not strong enough to deal with your own emotions. Now get the f*** out of my castle!"

Ishara looks down at her hands, they were itching, another anomaly. "This can't be happening..." she gasps with her hands covering her revelation. In just those last moments, the High Queen became a player, no longer tasked with the duty of managing the Universe and forced to dwell in the same living space with those she sought to condemn. "This is what happened to them..." She muttered referring to her siblings that killed themselves in a multiverse battle known as the War of Kings. Then the cosmos shuddered.

"Daughter, you have failed," The voice said booming into her chambers forcing the former Universal Judge to the floor in involuntary reverence. "Not only have you lost the book but now you have lost your self. His voice sounded like multiple voices cascading on one another. She couldn't lift her head to see him, his aura too bright, his presence too much. This was a long-fabled God of Creation on Earth!

Normally, an Observer would deliver news to the Judges, for they, messengers and authors in the eyes of the Gods. They read the stories the Observers watch but with a potential Destruction, God on Earth direct involvement would be necessary.

"Father, it's not my fault. I wanted to eradicate this wretched place. YOU told me not to." She protests being given a brief reprieve from his divine presence.

"Indeed, the destruction of this Universe would be an unfitting punishment for these humans. You know that. You're a Judge, Besides, despite It all, you have instigated a Galactic War in space. Giving the Imperium your blessings. You failed, and now you will suffer the same fate as this Universe. I have come in search of new potential candidates for the now-vacant judge spots.

It was unfair, they stopped her from a ruling, they did nothing as they mortals spread like a disease, They allowed her siblings to kill each other, now she was at fault.

"Oh no." She hissed like a defiant child. "Luckily for me, you can't destroy, but...I can...if you leave me down here with them. I will wipe every one of these degenerates from the Universe myself...and you know I will. Then it hit her, there was more at stake here than she was originally told. The Gods of Creation and Destruction were neutral entities, why would they even care about the releasing Entropy. "Father and Daughter" shared a brief glance before he dissipated away.