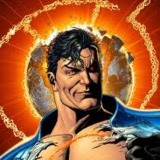 En Sabah Nur, the invincible one, he can never die, Mr. Bluelips, the REALLY ANGRY guy! It's bad enough that he was written as a complete non issue regardless of his formidable powers, moveset and backstory. But the final straw was most definetly his reincarnation.

Evan Sabahnur, the not-so-invincible one, the nerd who can never lie, Mr. Lonely. I hate him. Why do I hate him, because he's the poor mans replacement for the best mutant of all time. It's not bad enough that he's a clone of Apocalypse, he's a clone of the reincarnation of Apocalypse. That is the dumbest thing I have ever read (except Twilight) What is the point of reincarnating Apoc if some A-hole X-man is going to shoot a child in the head only panels after he is introduced? Why not have the damn Reincarnation be Evan? This is why X men comics disappoint me now.

Another Thing..... En Sabah Nur was an Egyptian, meaning he had a naturally low haircut, and other African features that I have no real idea about. So why does he look like some puke from Nebraska?

What I'm also disgruntled towards is the Artwork. I might be alone here, but recent X-artwork is freaking atrocious! It's depressing, boring and poorly drawn. I want something interesting to look at not some emo picture that looks like someone wet their paintbrush with tears.

Another thing...why is Evan so far being treated like a joke? We're talking about the (clone of the) Reincarnation of APOCALYPSE of all people! I need some kind of epic tale encompassing his moral choices. I don't want to wait 3 frickin' years for Evan to do ANYTHING of vague importance to the Marvel Universe or for Apoc to return. Please Marvel, make my suffering bearable.

What I THINK Marvel should do, is they should give Genesis his own comic series. All about how he's going to avoid becoming the most powerful mutant Villain in the world. Instead of having him as some side character. Evan clearly deserves a big spot since he's the clone of the Reincarnation of Apoc. Give Genesis his own Ongoing, get a decent writer, get someone who can actually freaking draw and make a decent series. If they can do that I'll be able to forgive Marvel for getting rid of the most Underappreciated Villain they have.

Anyway, I think that's all my rage..... Comments and Concerns please.

A Waste of Symbiotic Potential?

We All love Venom. That big old Lug of abomitable blackish blue goo. But I think our real focus should be his (many) Spawn.


We all were fans of the others at times.,And Besides that theirs just so many of them.
Theirs Carnage, Lasher, Phage, Hybrid, Scream, Toxin, Riot and others (I think) personally I think all this attention on the one symbiote took away from the ones with far more potential.

For Example, alot of fans want Toxin back, but for some reason we get nothing. While the Life Foundation ones lost their lives, due to that Pyscho they were hanging out with, we can't forget that their Symbiotes are still around, regardless of their fusion into another Abandoned Character. I say we seperate 'em and get some new host that won't make friends with a Schitzophrenizac.

All we hear is Venom this, and Flash Thompson that. I say we give the others thier own little stories to adjust too, with villians and foils that aren't already taken.  The Venom we all knew and loved has been turned into a carbon copy of Brock Lesnar for goodness sakes.

In closing All that needs to be said is, should we give the abused and forgotten another chance?
1 Comments