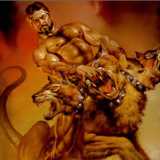 That would be a cool scenario but I just dont think anyone would get along, I mean, Ms.Marvel and Wonder Women be fighting all day to see who is better (I think Ms.Marvel would take it) and Wolverine and GOD knows who would be at it, then there are all the team battles that would happen. Villians would rule the world because the heroes would be fighting each other.