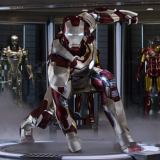 Riding a wave of interest and excitement over the new film adaptation of Alan Moore and artist Dave Gibbon’s classic superhero graphic novel Watchmen, DC Comics is experiencing a boom in demand for the book, shipping more than 300,000 copies of the graphic novel in the two weeks since the release of the film’s trailer.

The book is a perennial backlist bestseller and on a weekly basis is virtually always among Bookscan’s Top 50 bestselling graphic novels.

But the interest and demand generated by the forthcoming film (not due to open until March 2009), not to mention having the Comic-Con as promotional platform, has generated incredible demand for the book.

“I don’t think there’s record of a trailer moving books with this velocity,” says DC Comics president Paul Levitz. “Bookscan records Watchmen selling 10,000 copies in one week. We’ve put more than 300,000 copies in print in the last two weeks. That’s a pretty amazing record for a 21 year old book.” In 2007, the title sold about 100,000 copies.

“Comic shop retailers have used Watchmen for the last 20 years to introduce graphic novels to curious new readers and they know it creates repeat buyers,” Levitz says. “They sell a copy of Watchmen to a consumer curious about all the fuss and that reader returns for a copy of V for Vendetta by the same author. We believe this book is significantly expanding the readership for graphic novels.”

The book has been doing very well in online sales and was the number 5 best selling book on Amazon.com during the month of July, 2008.