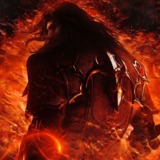 @jigen879: Here you go. Only the size of the United States.

And this was when Heven was once again part of Yggdrasil. So many years after those older and outdated comics.

Even when Mangog destroyed Asgardia and they had to return to Old Asgard all you see is this...

Even a pocket universe according to most rules of fiction it has to be galaxy size.

How many Asgardians are there as a people?!

In Asgardia or even Asgard you don't see that enough Asgardians to even make it seem like a pocket universe.

And thus Asgard is at best a small Continent floating in space.

Current Reborn Superman might not be able to destroy the Earth.

Current Reborn Superman took several hits, I mean pre-reborn Superman could hardly handle being close to the Earth core, less alone its core. While Pre-New52 and New 52 could handle that like it was nothing.

But Reborn Superman was shown recently he not only can't move faster than light (Flash#49) but in the last issue of Man of Steel he again showed some discomfort being in Earth's core.

So I wouldn't be surprised if this current Superman could not destroy the Earth. I mean even his kid, DC Comics keeps showing he's already more powerful than Superman in many ways. He only really lacks invulnerability and that's it, he surpasses Superman in terms of power.

This made as much sense as eating glass.

Really what was your point? Is there even a point? It seems more like you were asking questions and answering them at the same time.

Actually there are more things about Post-Crisis that did not crossed over to Reborn.

The Eradicator before the New 52 reboot was a energy being with copy version of that of Superman body, and now he's just a machine. Worse still he's a machine under the control of Zod. Mainly because it was Zod that apparently created him, when in PC the Eradicator was an alien device altered by Kem-L one of Superman ancestors.

Also don't forget Chris Kent! That one is gone for good. At least until the next big change in DC Comics. Lor-Zod is exactly or worse than Zod.

And there's the Jor-El situation. During the Oz Effect event Jor-El died and now in Man of Steel he came back as if nothing had happened.

So things are definitely different. Rebirth is still its own separate timeline.

And besides the cliché answers of Hope. Truth is that with the exception of New 52 and Smallville Superman, no other version if not for pure plot convenience, would've had much chances if the ship for example, landed in a desert, or in the ocean.

The New 52 and Smallville ships were quite versatile. And by far the best ships of them all.

The New 52 ship actually had, what Jor (or was it Lara) called a Brainiac level AI. And given the ship endless power supply and adaptation capability. If anything had gone wrong, the ship could always transform itself into a structure that could take care of Kal-El every need.

The Smallville version never had a chance of things going wrong, seeing both Jor and Lara actually came to the Earth, to prepare the way for Kal.

From Golden Age to even Man of Steel, Superman (with the exception of the New 52 and Smallville) if things had gone wrong -and they could've gone very wrong- there was really no backup plan. It could've really been a death sentence to Kal. Especially John Byrne Superman. That only began to develop his powers during his teenage years.

So besides the two exceptions I referred to, we can say it was all plot convenience or astronomical level of luck.

As long as Jon is around. There won't be another Superboy but him.

Not Conner, not Chris, and definitely not Superboy-Prime.

In a way certain things I read about Jon potential power, and how it should already be more powerful than that of his father, Superman. I kinda believed that they would bring about a entirely new Superboy-Prime. Kinda like Jon, from a future where things go terribly wrong.

When the story about the Overvoid is revealed, and how creation came to be. The "flaw" that gave rise to all of creation, was sealed inside a form. The form being that of Superman. More precisely what is known as the Cosmic Armor Superman.

When Mandrakk was released, only Cosmic Armor Superman was able to even stand against him.

By all intended purposes, Cosmic Armor Superman has the power to create and end universes like they are nothing.

Given the Monitors level of technology. Their powers. If a Monitor Destroyer ship, can easily erase universes, then imagine what Cosmic Armor Superman can do.

He could not just lift Mjolnir, but also destroy it, if he so wanted to.

To make this question more fair to Mjolnir, maybe the real question should be "Which versions of Superman, with the exception of Cosmic Armor Superman, can lift Mjolnir?"

Silver Age and New 52, were quite obviously more powerful than every other member of the Justice League. When they wanted to, or by other words, when the writer knew how to properly write Superman.

Even the DCEU Superman. Showed how powerful he can be if he's really not worrying about harming someone. I mean, he's recently resurrected and minutes later single-handedly he's tearing down the other Justice League members.

Although each member of the Justice League does brings something to the table Superman doesn't have...

Batman: Brings his insight into the worst of humanity. He almost never allows himself to get caught off guard. And that's why he tries to always be ten steps ahead of any scenario.

WW: Brings not just her amazing fighting skills, but also a good knowledge into the supernatural. Something neither Superman or Batman are comfortable with.

Cyborg: Has his connection to basically any electronic equipment and data base, to assure immediate intel, and even when it comes to stealth.

The Flash: No one can deny the Speed Force comes quite in handy, when near lightspeed actions are needed, and not having to worry about things like shockwaves and being detected. I mean Superman could be as fast as the Flash, but not on Earth. On Earth if he used the same speed as the Flash, he would kill everyone on his path. Seeing Superman doesn't possess the same type of protective aura of that of the Flash.

Green Lantern: The green lantern database comes in handy when the threats are alien.

But bottom line is that with the proper training, Superman could basically do almost everything the other JL members do.

But writers don't like to write him like that. Or the question would rise... "Just why does Superman needs the other team members?"

Ruined him... Ha! More like made him what he is today.

Almost every great feat, the better characters, friends and foes, were introduced during the Silver Age.

Rather it was the Modern Age that messed up Superman.

Before the Modern Age, Superman was far more independent, proud of both his kryptonian heritage and his human upbringing.

Then came the Modern Age and with the New 52 exception, every other version of Superman is basically a hypocrite whining idiot.

Recently Rebirth Superman used the Flash cosmic treadmill, to travel back in time, to the moment of Krypton's destruction. And instead of taking a special suit, seeing he was gonna have to deal with red solar energy and kryptonite, he goes there with his normal suit. He's then conveniently launched to a alternative timeline, where Zod and Jor-El had allied themselves to save Krypton. He's on Krypton and gets surprised when a energy blast wounded him.

When you get Booster Gold telling Superman the most obvious things, you know something very bad is being written.

Silver Age Superman was never that reckless or stupid.

And that means what exactly!?

More than once I've seen fans holding on to this "they shook the entire world of the void".

But here's the thing. We know nothing about it, except it's apparently mostly empty. Just these clouds everywhere.

We don't know it's size, we don't know if it's even a real place or something created specifically for these type of events.

I mean, the Hyperbolic Time Chamber, was simply a pocket dimension, that we know was the size of the Earth.

For all we know the World of Void isn't that much bigger than the Earth or a star.

People got this new unknown stuff, and already they assume it's the size of a universe.

That's the problem with DB fans that try to forcefully explain things their way. They make-up stuff, so they have something, anything, to prove what can't be proved. What DB will most likely never show, really because they know the consequences of doing it.

Look at Zeno! He went from the guy that could destroy all the universes. To simply the guy that possesses the ultimate Hakai power. He basically can erase anything.

And that's just it. Seeing so far we haven't seen him actually create anything. Zeno is looking more and more like nothing more than the supreme god of destruction.