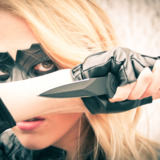 Heather Antos was born with secret aspirations to become the next James Bond. However, since her lack of British heritage has pushed that dream aside, she now spends her days as the girl who will never grow up. She has an obsession with comic book superheroes and believes that she might be Batman; after all, she’s never seen him in the same room as herself, and they do have the same abs.