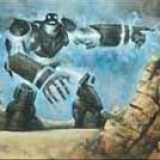 Ok this thread has been giving me problems. I will make this Blog so if it ever resurfaces I can just say refer to my blog for the majority of my opinions

Who do I think wins? Well I think Goku wins, but there is a small shadow of a doubt

Why do you say goku? I say it because he has a wider range of powers then superman, he can teleport and is capable of more destruction

So Supermans invunerable. What can Goku do to hurt him? Well supes is really tough but hes not invincible. Doomsday can beat him senseless so as long as you read this knowing that then I can give you a little credit.

I think goku is capable of harming and killing superman. He has the power to destroy a galaxy.

Wait Heart of Infinity I never seen goku destroy anything that big how did you deduce that? Well simply Broly did it in his first movie and Goku later surpassed him. So you put the two and two together its really simple.

Now DBZ doesnt have rating scales. Like DCs and marvel where we see what a character can bench press or what their top speed is. Superman is a little shy of light speed. They show dbz characters moving at high speeds yet we don't know what speed it is. I can only guess by how it apears.. Gotenks going around the world dozens of times at superspeeds in a instant at least may suggest that they can equal or surpass lightspeed.

But yet we dont have enough information to really state their speed so at best its incunclusive as to wether hes faster then Superman or not. Strength is incunclusive.

Who is more invunerable is incunclusive

So people want to show scans of superman performing great feats. I already know what he can do so your wasting your breath. You can never prove that someone is stronger then someone else if you dont know one of their strengths (like gokus) so you can say superman can do this and that but you still can't compare it to an unknown.

What about Instant Transmission would it work on superman? I tried to explain this to people. Goku only needs to find a person where he doesnt know their location to teleport to them.

But lets say hes going to a place hes been too already or a place he can see with his eyes then he can still preform the technique.

Ok so you explained your opinion on instant transmission but does superman have ki? Its hard to determine he is an alien. I would say (this is just an opionion so I am not the authority on this that he may have some)

Ki is energy from your life force. Its the same as the chinese version wich is called "Chi". At least in the DBZ universe goku could even find bulma wich is a regular human or aliens on another planet across the universe. So if superman has lifeforce energy then its a possibility

So what is the conclusion?

I have two. If you want to accept akira toriyamas representation of their powers from the broly movie then its a curb stomp for goku

because we have no proof of gokus powers. At best we can say goku is fast and is strong and we dont know how he matches vs superman.