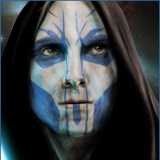 Powers:
Flight- Hawk can fly at speeds just below the speed of light.
Strength- Though his strength has not been fully tested, Hawk has held up several tons for long hours.
Healing - Regeneration
Fighting Ability - Hawk is a trained Weapon X, born and bread to kill.
Wings- Nanotech wings are able to adjust the light around him in a cloaking fashion.
Electrical pulse - The shock can only transfered a short distance.
Animal Communication - Hawk can control any animal in more than a mile radius. He can also see and feel what they are feeling.

Weakness
Hawk still has human skin and feeling. Though he heals at an advanced speed he still feels every injury.
He is known to disregard his training and rush head on into a fight, instead of planning.
Will become filled with blood lust and blackout killing everything in sight.

Hawk, was raised by bird conservationalist. Or that's what he thought. Hawk was a weapon from birth, his healing ablities and flight made him a perfect canidate for Weapon X.

With all Weapon X he was tested to what they thought his limits were, pushing his healing and animal telepathy to there limits. The probed and enhanced his abilities until he was the ultimate killing machine.

Memories of a happy childhood were implanted into his brain. A beautiful mother and wise father, loving parents who didn't care that their son was different. It was all a lie he would find out after the incidents in Wanted.

After the incidents recorded in Wanted Hawk was left broken and thought to be dead. His body mangled and destroyed. His wings had to be amputated because of they were destoryed when a bomb went off in the Zero Squad HQ. He was burned head to toe and dying alone in a swamp.

As he lay there in the swamp his healing factor went to work. Hawk memories of his childhood came rushing back to him. But they were becoming distorted with images of labs and tourturous acts. Soon his mother and father all but disappered. The memory implants were being rejected by his body. His true past was coming back to him. His killings, his missions, his real parents. A scared young mutant couple giving there winged son up for adoption. His mother with flames in her eyes, his father a man of great size. The man who would adopt him, and then tourture.

With a blast of energy, Hawk's body rose slightly from the waters of the swamp. He skin the was torn and burned quickly returned to new. His strength had returned. Hawk's healing power went to return him to his original state, his tattoos were pushed out of his skin, and most importantly his large wings grew out of nothing.

Hawks wings are super durible. They can take weapons fire, extreme heat and cold. They are used for flight and defensive purposes mostly. Hawk has been known to use them offensivly in certain circumstances.

After the events of "Clash of Codes" Hawk had upgrades to wings bones and eyes. His wings once made out of feathers are now made of a compound made to look like feather but with greater strength and durability. They have given him a greater speed of flight. By shifting the light around him Hawk wings can cause him to disapper.

Hawk's eye are now able to zoom in to great lengths giving him nearly perfect aim. His bone have been laced with a light and super durable metal compound, which he is able to charge with a electic change that can be shot out of his wings.

Hawk carries twin Katana swords, throwing knives, and a mace sometimes. When in a very large battle Hawk will were a battle helmet.

As far as teams go, there has been no greater team than the Zero Squad. A group that was put together of all the best and brightest heroes on the Vine. Hawk joined on the sponsorship of Andferne. He was a young warrior who was still learning the ways of the vine.